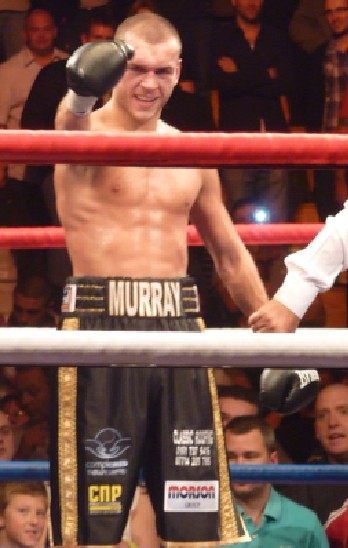 A hungry John Murray back with a win: ‘I’m a very dangerous man’

A pumped up ‘dangerous’ looking John Murray made his long awaited ring return after two years out since his last fight, the defeat to Brandon Rios in his world title challenge in December 2011. The Murray Machine was in a 6-rounder against Spanish based Nicaraguan Michael Escobar and it was like Murray of old, never a dull moment!

Murray dropped his opponent twice on his way to a 4th round TKO – on Friday night at the Bowlers Arena in Manchester.

Murray, 29, coming to the ring with the blaring sound of his version of ‘Johnny be good’ signalled his return as the popular Mancunian entered the arena. The fans in attendance made there approval known and the place erupted, John Murray is a popular boxer in his home city, with fans and fellow boxers alike, he is a fighters fighter, you know what you get with Murray.

Both boxers traded shots from the first second of the contest and the smaller Escobar proved with his own attacks that he had come to the UK to give it a go. But Murray in typical fashion, tucked up, gloves wrapped round his hidden chin and let the hooks to body and head go and Escobar was feeling the power and he was acknowledging it by nodding to Murray.

Former British and European lightweight champion Murray was having to defend some wild swings at times, but after a couple of cobweb shedding rounds, Murray started to sink the shots in and and bring them up through the middle and hooking down stairs into the body and Escobar was feeling it, so much so he crumbled after one too many. Up to complete the round and head back to his corner, it now seemed that the writing was on the wall.

Round four and Murray upped the gears, he stalked his wounded opponent and was picking his punches with more accuracy and a beautifully timed screw left hook jolted back Escobars head and sent him to the canvas again and the fight was over at 1:43.

Murray, now 32-2(19KOs) looked focussed throughout the fight and was too much for a brave but outclassed Escobar. After the fight Murray spoke of his relief to finally be back and his hunger to get back to the top and to take the lightweight division by storm once again!

“I’ve been out for two years, so I was a bit rusty, but I’ll get sharper, I’ll be straight back in the gym and get back out again as soon as possible.” Murray told Coldwell TV.

“I’m glad to be back, I want fights with all the top kids at lightweight, I’m a very dangerous man.

“This is the hungriest I’ve been since I turned pro 10 years ago.

“There are a lot of big fights out there for me and I’m confident I’ll win them all.”