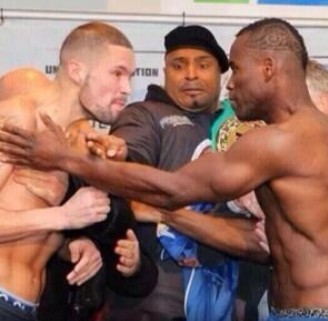 Stevenson then approaches Bellew who steps forward, both fighters lock horns, foreheads touching and pushing their heads into each others, which has been perceived as head-buts. They were not quiet ‘Glasgow Kisses’ but enough to cause a storm and set the place weigh-in alight on the eve of this exciting clash, and a great chance for Bellew to become world champ.

Bellew is the mandatory challenge for Stevenson’s belt and it looks like he had a plan to wind up the champion, who up until that point had look calm in the build-up, but Bellew soon put an end to that! Both had to be pulled apart by their respected teams and Stevenson appeared to explode and try to get back at Bellew, while the ‘The Bomber, just continued to shout at him. If Bellew planned to rattle Stevenson, he succeeded!

“The little pimp put his face on me, he butted me, I butted him back. Tomorrow I’m going to dispose of the little pimp,” Bellew bellowed in reference to Stevenson’s conviction and jail sentence for being involved in prostitution in the 1990’s.

This fight was already promising to be hot, the touch paper was lit today and the temperature has shot through the roof, this should be an explosive cracker!

Bring that belt home Tony… All the best from www.britishboxers.co.uk