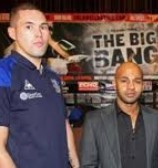 Coldwell tips Bellew: ‘I have no doubts that he’ll be world champion.’

With a hectic weekend now a fond memory, Dave Coldwell ditches the promoter tag for the next few days as he wraps up warm to brave the freezing Quebec conditions that await him this Thursday. After surviving numerous niggles at his “Hot Shots” event on Friday evening which saw the return of Manchester’s John Murray, Coldwell’s focus has now switched to joining Mick McAllister in ensuring that Liverpool’s Tony Bellew ransacks the lion’s den when he faces the in-form Adonis Stevenson this Saturday night.

After occupying a corner assistant role for Bellew’s recent showdowns with Argentinean import, Roberto Bolonti, and awkward Malawian, Isaac Chilemba, Coldwell has seen enough to be more than convinced that “Bomber” can pull off one of British boxing’s most impressive away days by ripping Stevenson’s WBC light-heavyweight crown away from him.

“I’ve known Tony Bellew for a long time now and even before he threw a punch in a professional ring, I thought that he could be a world champion. Saturday is a huge opportunity for him and it’s a chance that he can definitely exploit if he gets in there and does everything that he’s worked on over the last couple of months. He’s got a fantastic team around him who don’t leave a stone unturned and his attitude to training is one of the most dedicated I’ve seen. Tony knows that it’ll be hard but he wouldn’t have it any other way. This kind of challenge will bring the best out of him.”

The lengthy path for Bellew’s upcoming showdown is one that has been littered with a number of obstructions both in and out of the ring. Undefeated since narrowly losing out to domestic rival, Nathan Cleverly, back in 2011, the Everton fanatic has made the WBC title his top priority and his route to his goal has been plotted meticulously. A string of contests against Edison Miranda, Bolonti and Chilemba have resulted in Bellew being within touching distance of the 175lb division’s lofty summit and Coldwell believes one last final push will see Bellew fulfil his dream.

“Tony knows full well what he has to do in there. I’m flattered and honoured to be a part of his team but once that first bell goes on Saturday night, it’s all down to him to go out there and show everyone just how good he is. I know he can be world champion, his team know it, and most importantly of all, Tony knows it. He’s probably imagined this fight millions of time in his head and he knows what he needs to do. If he does that on Saturday then I have no doubts that he’ll be world champion.”