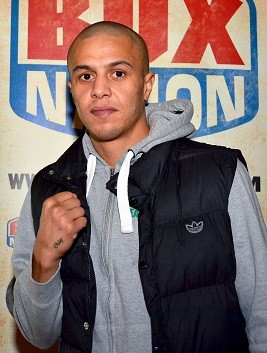 In what will be a cracking Yorkshire derby fight, Bradford’s Femi Fehintola and Dewsbury’s Gary Sykes clash at Leeds’ First Direct Arena on December 21.

The pair go head-to-head on the undercard of Stuart Hall’s IBF world bantamweight title challenge against Vusi Malinga, and Fehintola is promising to derail the Sykes express.

Sykes, the former British super-featherweight king, is set to challenge for his old belt against Cromer’s Liam Walsh early next year, but Femi is planning an upset which will see him scupper Gary’s title ambitions.  The clash between the former training partners has also been added extra spice after Fehintola recently left the Central Boxing Academy where both trained.

“This is a massive fight, a massive opportunity,” said Femi, who has lost just two bouts in his 26-fight career.  “I wouldn’t really say it’s a grudge match, but there is a lot of needle going on which is more to do with his trainer, Julian McGowan.

“I went to Sykes’ gym to work with Julian but he was missing for some weeks.  So I started working with Sean O’Hagan, who trains Josh Warrington, and I realised that he was the man for me.  So I think there’s a bit of jealousy going on.”

Fehintola knows this scrap is a must-win affair.  After turning pro in 2003, the 31-year-old has twice come up short in title fights – for the British crown in 2006 and the English in 2008.  Against Sykes, ‘Fire’ is determined to secure bragging rights over his Yorkshire rival and then make it third time lucky by winning the British belt.

“I’ve sparred with Gary Sykes in the past, and this opportunity came up and I’ve grasped it with both hands.  I rate him, I think he’s a good fighter, but I think it’s my time now and I know I’m going to beat him.  We wanted this fight and we haven’t made it for the sake of it, we’ve made it to win it.  I’m a born winner and I’m going to go in there and do a job.

“I’m doing everything I can in the gym, and my trainer knows Gary Sykes inside and out.  I’m confident and I hope he’s preparing for the best Femi Fehintola.”