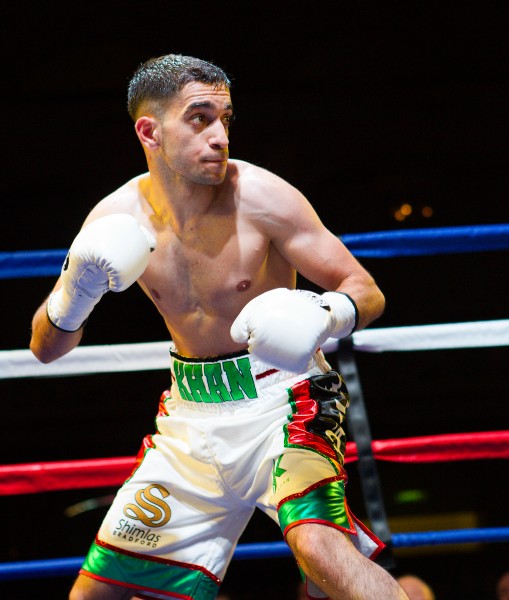 Haroon Khan will bounce right back into action next month in Wigan following his demolition of Bulgarian Stefan Slavchev.

The Bolton youngster looked calm and assured in the ring last Friday night at Blackpool’s Winter Gardens as he patiently broke down his 20-year-old compatriot who had no answers to the succession of quick flurries and powerful right hands that kept landing throughout.

The 2010 Commonwealth Games bronze medalist returns to the ring on December 14th in Wigan after moving to a record of 3-0 following his victory over Slavchev.

Khan showed tremendous maturity in his recent outing as he picked away at his opponent and circled him over the course of the fight, refusing to waste any shots, and smart enough to avoid getting carelessly caught by rushing in.

His patience over the four rounds was telling, as he continuously pushed back his opponent, who went into his shell after feeling the young super-flyweight’s power.

The 22-year-old, younger brother of former unified light-welterweight world champion Amir Khan, continues to show that he has inherited the same exciting boxing genes as his older sibling.

The future is bright for one of Britain’s top young prospects who is looking forward to jumping straight back into the ring again as he looks to make moves on the domestic circuit.

“I’m pleased with how I did against Stefan Slavchev but now I’m looking to the future and December 14th,” said Khan.

“It was great to get another win under my belt and I’m aiming for a similar performance in Wigan next month. My team are looking to move me at a good pace and the level of competition is going to keep getting better as I progress but I’m ready for that challenge,” he said.

“It was good to have Amir ringside for my last fight – that gave me a big boost. His insight, along with Oliver Harrison and his team gives me a solid foundation to really push on over the coming months,” Khan added.

Khan has his hands wrapped pre fight, watched on by brother Amir

Victory and things are looking up for Haroon

The opponent for Haroon’s next fight and ticket details will be announced in due course.