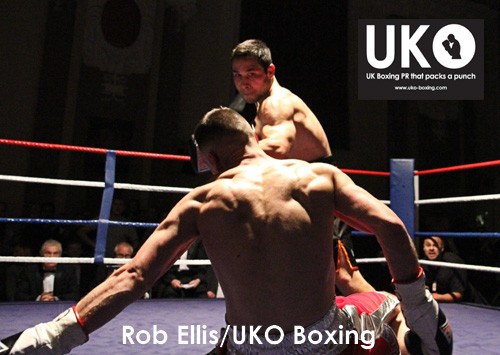 James KO’s Male in one plus Walsall undercard results

The Coventry boxer faced Cradley’s Chris Male on EJKO Promotions’ ‘Double Trouble 2’ show at Walsall Town Hall in what was seen by many as a real 50/50 fight. It proved anything but as James blew away Male inside three minutes.

James was the aggressor from the opening bell and a heavy right saw the Punching Postman almost exit through the ropes. Male managed to get to his feet following an eight count but James was relentless and continued to push forward. He caught Male with another spiteful right hook which knocked the Cradley man out before he had even reached the canvas.

Referee Rob Chalmers called an immediate end to proceedings and thankfully, after receiving oxygen, Male was soon on his feet. The fight was also a British Eliminator so James’ impressive victory moves him up the BBBoC rankings and closer to shot at the coveted Lord Lonsdale belt.

“It couldn’t have gone any better,” James told www.uko-boxing.com

afterwards. “I caught him with some really good shots and I was just pleased to get the job done so quickly. I’m glad Chris is OK and I’m just focussing on a British Title shot now.”

Steven Pearce was also victorious as he lifted the International Masters Welterweight belt by stopping Stafford’s Rob Hunt. (pic above)

The Stourbridge fighter executed his game plan to perfection, walking down his taller opponent. Hunt’s tactics to work off the jab saw him have some early success but Pearce had taken control by the third round, shortening the fight and visibly hurting Hunt with powerful combinations.

Backing Hunt into a corner at the start of the fifth round, Pearce unloaded and caught Hunt with an energy-sapping body shot that took the wind out his sails. Hunt couldn’t recover in time and Pearce, a former Midlands Area Champion, claimed the vacant International Masters strap.

“I said I needed a big performance and that’s what I delivered,” Pearce told www.uko-boxing.com

“Hunt had the height on me and wanted to work his jab, which he did in the first couple of rounds. I kept coming forward though and like I said before the fight, ten rounds is a long time to keep someone like me at range.

“I knew I was hurting him and it was great to get the finish. It’s onwards and upwards from here.”

Elsewhere on the card, West Bromwich prospect, Tom Stokes, stepped up to light middleweight and looked strong against the durable Danny Donchev. Stokes took his record to 3-0 with a convincing 40-36 points victory.

There were however contrasting debuts for Halesowen super middleweight, Lennox Clarke, and Tipton flyweight, Ainsley Ratcliffe.

Clarke impressed as he despatched of Worthing’s James Child inside two rounds. The 22 year-old had Child down in the opening round and shook his opponent every time he connected. Referee Shaun Messer wisely stopped the contest after 1:58 of the second round after Clarke unleashed a powerful right hook that dazed Child.

Ratcliffe however had a harder night as he came up against a very game Csaba Kovacs. The Romanian, who himself had made his professional debut just the week before, came to fight and was much stronger and taller than his opponent. Ratcliffe looked technically sound and it was easy to see why he had reached the NABC Finals last year. However, it was Kovacs who possessed the power and Shaun Messer gave him the nod 39-38 after four entertaining rounds.