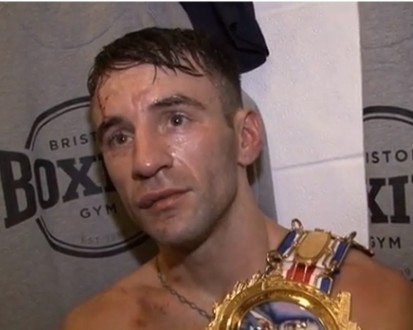 Bristol’s Lee Haskins retained his British bantamweight title after out-pointing Jason Booth in a tough scrap at the City Academy on Friday night.

All three judges scored the fight in favour of Haskins 118-111, 117-112 and 119-111, but it was an hard nights work for Haskins as the veteran Nottingham man having his 49th professional outing pushed the champion all the way in a competitive fight.

Haskins was sharp from the start and established an early lead behind his jab, he was countering Booth well and looked in control, but Booth in inspired mood back down at bantamweight. was constantly coming forward and Haskins in-front of a big home support had to be alert at all times to tame ‘2 Smooth’

Haskins on the outside was dictating the action but when Booth was able to close the distance, he had good success inside and this was a tactic he employed in the second half of this championship battle. Booth had his best spell in the 6th and he was starting to shift the momentum in his favour and Haskins was troubled and had to dig down, this was turning into a tougher fight than maybe the champion though it would be.

Booth continued to hunt down Haskins and try to take the play away from Haskins and in the next few rounds he was able to draw Haskins into his kind of fight and was working the champion well, but Haskins took what Booth had to offer and after a few rounds off began to to re-establish his authority going into the championship rounds. Haskins got back into his earlier rhythm and in the last round finished strong and almost having Booth, who was cut now and taking a beating, out on his feet, but he held on to deservedly finish the fight.

It was a gutsy display from Booth who has now been pro now for 17 years, he was in great shape and put in a spirited display, proving once a warrior always a warrior. Haskins boxed well deserved his win and can now move on to bigger fights. The support from the Bristol fans for Haskins was big and they did him proud. A world title fight in the West country for Haskins would be a night to remember, lets hope this talented British campaigner can get a shot in the next year or so, it would be one night to remember.