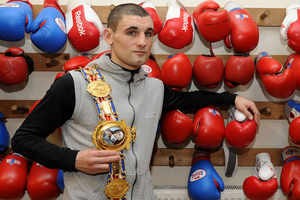 Walsall’s Martin Gethin has revealed his disappointment after he was forced to pull out of his British Lightweight title showdown with Anthony Crolla earlier today.

Gethin was set to make a maiden defence of his Lord Lonsdale belt on the undercard of Carl Froch’s WBA and IBF Super Middleweight title showdown with George Groves at the Phones 4u Arena Manchester.

However, Gethin has suffered a reaction to the perforated ear he picked up during his IBF Final Eliminator defeat to Ammeth Diaz in May.

“I’m gutted but it’s just one of those things,” Gethin told www.uko-boxing.com. “I’ve had a bit of a set-back. I’ve had a reaction and it’s affected my training and it means I won’t be able to fight Anthony next week.

“It’s a massive night of boxing next weekend and I wanted to be a part of it. It’s disappointing.

“I’ll wait for it to heal and seek specialist advice with a view to being back out, defending my title in early 2014.”