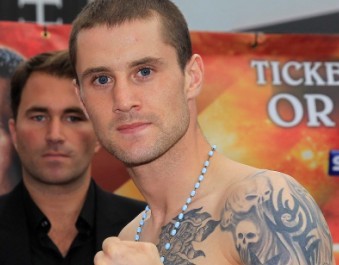 Burns lined up to defend his title against Crawford

WBO lightweight world champion Ricky Burns is set to defend his title against dangerous mandatory challenger Terence Crawford at the Hydro Arena in Glasgow on February 8th. Although this date has been pencilled in things could however change if a scan on Burns’ broken jaw next week reveals the damage has not healed enough for a quick return to combat.

Burns does have a deadline to defend his belt by March 7, so if the jaw needs more time to heal, then he will get another month.

“Whenever the fight takes place, Ricky will make a statement to the world.” said his promoter Eddie Hearn.

“Everybody knows there was a lot of criticism when his last defence of the title against Ray Beltran was scored a draw.

“But Ricky did fight Beltran for 10 rounds with a broken jaw. Where’s the credit for that display of bravery?

“That’s why the champion will want to make a statement about himself against the challenger.

“I don’t think Ricky’s all there sometimes – boxing’s a crazy sport and here we have someone who took heavy blows to a broken jaw for 10 rounds signing up for more.

“Ricky won’t overcome the psychological barrier until he begins sparring and takes a blow or two to the same area.