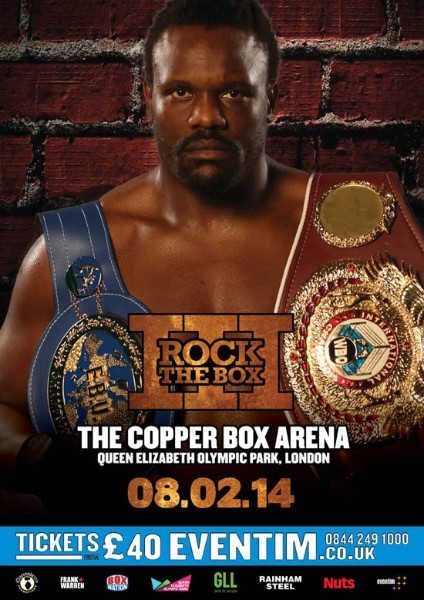 Click here to get Rock the Box 3 tickets on Eventim

Chisora, who has turned his career around this year with sensational power-packed performances, is on course for a second world title shot and needs another crucial win to keep in prime position and awaits news of who will be in the opposite corner.

“I’m excited to be entering 2014 with a potential world title shot on the horizon.  I’ve shown this year that I mean business and when I’m fit and in shape, nobody in the division can beat me.  The hunger and desire is there burning away and I won’t stop until the world title is strapped around my waist.  I’m disappointed that David Price vacated, that was a great domestic showdown for the fans, but he’s gone another route, and Fury is looking at other options, and Wilder doesn’t want to know about me.  Either way I’m on course for the world title and I’ve just got keep doing what I’m doing and win.”

Hatfield ace Saunders makes his return to the ring after a hard twelve months that has seen him win four back-to-back fights going the full twelve-round distance and beating his main domestic rival in John Ryder.

Saunders makes the third defence of his prized British title, which means he would make the belt his own property if his wins, and also puts his Commonwealth title on the line against a challenger to be confirmed.

Warren said he would be keen to move Saunders up a division to super-middleweight to challenge former Beijing Olympic team mate James DeGale in a cracking all-British showdown, while Saunders also had some stinging words for rival Chris Eubank Jr.

Cleverly, the former WBO World Light-Heavyweight Champion, returns to action after he was due to fight on the last Copper Box Arena show in November but had to withdraw after sustaining a back injury whilst doing dead-lifts with weights.

Cleverly will go straight back into championship action when he takes on rugged Australian Daniel Ammann for the Vacant Commonwealth title.

Fast rising talent Buglioni makes the first defence of his newly acquired WBO European Super-Middleweight title that he won at the Copper Box Arena last time out with a devastating body shot to halt Stepan Horvath in the eighth round.

It was the first title win of undefeated Buglioni’s career and he’s looking forward to defending the title and picking up more experience next year as he takes his career to the next level.