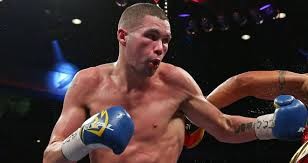 Tony Bellew will make his cruiserweight debut in his home City when he faces former world title challenger Valery Brudov at the Echo Arena on Saturday, March 15.

The Liverpool fighter made the decision to move up to cruiserweight following his defeat to super-middleweight world champion Adonis Stevenson at the end of last year, the second time he had come up short in a world title shot following his loss to Nathan Cleverly in 2011, when the Cefn Fforrest man was WBO world champion.

Bellew, 31, says he will be targeting a third world title attempt at cruiserweight before the end of this year and was keen to start his new chapter against a top-level fighter and Brudov fits the bill. He challenged both Virgil Hill in 2006 and Guillermo Jones in 2010 for their titles in a career which has seen him knock out 28 of his 41 victims and lose just four times, including last year’s defeat to world ranked Brit Ola Afolabi.

‘The Bomber’, a former British champion and Commonwealth light-heavyweight champion decided to step up in weight after years of fighting the scales. Bellew feels he will be a stronger fighter at cruiserweight and less vulnerable to shots. He made the decision following the defeat to Stevenson, but says even if he would have beaten the impressive Canadian champion, he would have still moved up in weight any way, such was the task he had of boiling down to light-heavy.

Bellew stands at 6ft 3in and believes he will adapt better with the extra poundage and without the pre fight battles to make 175lbs, will rediscover the knockout power that earned him the nickname ‘The Bomber’.

“You are going to see the old me, without a doubt!” he said. “I’m happy to trade at this weight because I’ll have no vulnerability factor about me any more.

“The main thing I have been working on is the technical side of my game, defence and of course taking people apart, stuff like that.

“Before it was always all geared towards losing weight through camp and even though you are boxing training, in the back of your mind you’re fighting the scales.

“I have learned from the mistakes I’ve made and I have made them at the very highest level. Don’t forget I haven’t had 40 fights, I’ve had 23 fights and I’ve fought for two world titles.

“I’ll probably be the favourite with some of the champions, simply because I am not going to come across anyone who’s as good as Adonis Stevenson in this division.”

Also on the Liverpool Bill

The night will also feature three of the Smith brothers, Kell Brook’s warm-up fight before his world title tilt and Londoner Kevin Mitchell, who continues his comeback at lightweight. Brook’s opponent hasn’t yet been named, but he will hope to get some rounds in before he challenge’s for the IBF welterweight world title, currently held by Shawn Porter, later this year.

Stephen Smith takes a step into world level as he takes on Argentina Fernando David Saucedo for his WBC Silver featherweight title in what is also an eliminator for the world title. His big brother Paul Smith can claim the prestigious Lonsdale Belt outright with the third defence of his British super-middleweight title and the youngest Smith, Callum Smith, looks to continue his fantastic start to his promising career.

Former British champion and world lightweight title challenger Mitchell has had three good wins since losing to Ricky Burns in September 2012, and will continue his rebuilding, has he looks to get back in the championship picture. Young Flyweight prospect Kal Yafai and Liverpool youngster Robbie Davies also make an appearance on the packed bill.

Unbeaten super-middleweight prospect Rocky Fielding will take on fellow Scouser, former British champion Tony Dodson in what should be a cracking encounter.