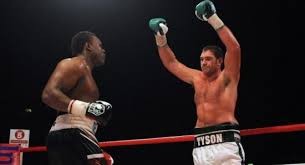 At the press conference to announce the Feb 15th “Rock The Box 3″ show at the Copper Box arena, London, Warren told the assembled press of his intention to once again match Tyson Fury with his EBU heavyweight champ Dereck Chisora (19-4, 13KOs) in a repeat of their 2011 British title clash.Warren told IFLTV he intends for a June clash to be a final eliminator for the WBC strap to be contested by America’s Chris Arreola and Canadian Bermane Stiverne. This is of course, if both men come through clashes on the February show; Chisora against former world title challenger, American Kevin Johnson and Fury against Argentinian Gonzalo Omar Basile.

I feel unbeaten American prospect Deontay Wilder is the best foot forward for the 6’9″ Fury and that a Chisora rematch is nothing more than a step back. Frank Warren has shown unwavering loyalty to Chisora through thick and thin and I can only wonder as to whether he really has Tyson Fury’s best interests at heart. Domestically, with his highly regarded business acumen, Frank Warren is one of the best in boxing and knows how to sell this clash to the British public. With my cynical hat on I feel he wants this match to promote his BoxNation TV channel, and the whole thing screams “money fight” so loudly I can hear it from here!

Regardless of what I think though, it seems certain the fight is to take place. So with that in mind, I decided to sit down and watch the first fight over again, analyze its outcome and assess what, if anything, is different for both men today. The most important question however, is, if they do fight again, will the result be any different?

Firstly, I had forgotten what a great domestic encounter this was. A flagship fight in that it was the first fight shown in the UK by a terrestrial broadcaster (5), since the ill fated Audley Harrison BBC days. For the viewing public, an entertaining dust up was required and that is what we got.

There was much hype going into the first bout. Chisora the then British champ, Fury, the 22 yr old upstart challenger. Both men 14-0, neither ever having been past 9 rounds, it truly seemed on paper to be a 50/50 fight. The feeling amongst the boxing press however, was that Chisora, with his bully boy, marauding style, would have too much for Fury. As is often the case, the so called boxing experts were wrong!

Forgetting the actual UD scores for Fury, I decided to re-score the bout myself today, with fresh eyes. I gave it 118-110 for the Mancunian. The official scorecards similar. The three judges in attendance that night gave it to Fury by margins of 117-112, 117-112 and 118-111.

Fury came of age that night and reminded me why to this day I still rate him highly. It was a great performance from such a young fighter. Chisora came in looking to brawl, looking to walk Fury down and land a big overhand right on the taller man. His success was limited to say the least, and in between tongue lashings from his corner all night for failing to utilize his jab, he appeared lazy, tired and desperate for large portions of the bout.

Anybody doubting the boxing skill of Fury and his ability to deal with and cope under pressure, needs to watch that fight. At times Fury was Klitschko-esque, using his ram-rod jab to keep Chisora at bay, clinching and applying his size as pressure when things got tough on the inside. Exactly like Wladimir. He also showed a great gift for combination punching and an ability to switch hit, things we have sadly not seen much of lately and qualities that are NOT very Klitschko. The performance from Fury that night would put any heavyweight in the world (barring the brothers) to shame.

So, what about today? Where are they now? And given the possibility of this rematch, just who is likely to take it?

Despite appearances of inactivity, Fury has fought 6 times since the Chisora bout, yet the level of opposition has without doubt been weaker than some of those faced by his Finchley rival. However, Fury is the man who remains undefeated, scoring wins against unremarkable fighters like Nicolai Firtha (W-TKO-5), Neven Pajkic (W-TKO-3), Belfast taxi driver Martin Rogan (W-TKO-5) and Vinny Maddalone (W-TKO-5). His last two outings have been the only noted step up, facing ex world title challenger Kevin Johnson (W-UD-12) and ex-cruiserweight king Steve Cunningham (W-KO-7).

It is Chisora who has faced the better opposition and been slightly more active, fighting 8 time. Yet when he has stepped up in class, despite being applauded for his performances, he has been defeated. Against Robert Helenius (L-SD-12), Vitali Klitchsko (L-UD-12) and British ex WBA champ David Haye (L-TKO-5). I feel his lauded return to fitness and new found form in 2013, is something of a joke. Malik Scott (W-TKO-6), Edmund Gerber (W-TKO-5) and Ondrej Pala (W-TKO-3) are all fighters Tyson Fury could dispatch with similar ease.