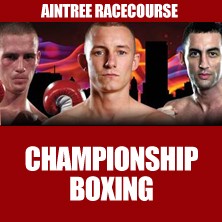 Farrag has targeted a title challenge by the end of the year and needs to beat the battle-hardened Booth to prove that he is ready to step up to championship level.  He’ll meet the Nottingham fighter over eight-rounds on the undercard of Paul Butler’s WBO/WBA Intercontinental Super-Flyweight title defence, live and exclusive on BoxNation (Sky Ch. 437/Virgin Ch. 546).

The 25-year-old’s slick boxing skills have taken him to 10 wins from 11 fights with his sole loss coming against current British Champion Lee Haskins on points in the Prizefighter tournament.

Booth is still one of the top operators in the 118lb domestic division after almost 20 years as a pro.  In 49 fights he’s captured British and Commonwealth titles from flyweight to super-bantamweight plus an IBO title.  In that time he’s faced some of the best including Steve Molitor, Kiko Martinez and Scott Quigg.  More recently he’s tackled Kid Galahad, Martin Ward and in his last fight he took Haskins the distance in a British title challenge.

“Booth has been in the game a long time, he’s experienced and it’s a real step up for me, it’s a battle of youth and aggression against age and experience,” Said Farrag.

“I’ve not had the chance to show what level I’m at before, but this fight will bring the best out in me.  Booth is a quality operator, he’s seen it and done it at a high level.  For me this is an ideal fight that will get me great exposure with a win and should put me in line for a title,”

“It’s a tall order to stop someone like Booth, I’ve just got to work my skills, outbox and outclass him.  I’m younger, fitter and fresher than he is, let’s see if he can match the work-rate I’ll set,”

“I’ve got my targets set on winning a title by the end of the year and Booth is the first hurdle I have to get past.”