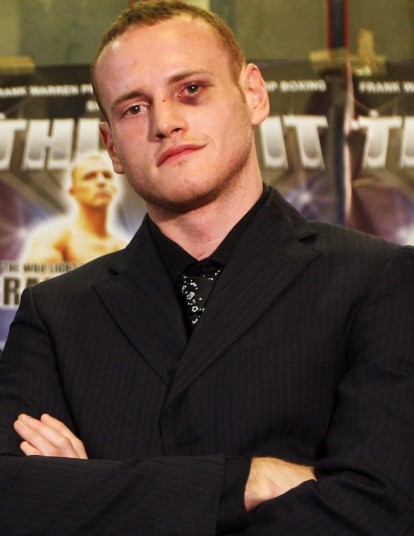 George Groves wants his ‘0’ back!

George Groves is not letting up until he feels justice has been done. The Saint’ who successfully appealed to the IBF recently regarding the controversial ending to his fight with Carl Froch in November, is now demanding that the result of the fight which he lost, to be declared a no contest and his unbeaten record reinstated.

Groves, 25, believes that the evidence he presented to the IBF recently to regain his No1 mandatory position and an immediate rematch with the champion will also be enough to convince the British Board of Boxing Control to declare the first fight ‘null and void’.

Froch has 90 days to make a defence against Groves under the IBF rules and talks for a rematch are well under way. The fight is expected to be put out to purse bids and is likely to be made for sometime in May if it does happen. Froch also has the option of a fight against Julio Ceasar Chavez Jnr waiting for him in Las Vegas, but to take that fight he would have to give up his IBF belt and turn down the return with Groves, it doesn’t look like he wants to do that so the rematch looks live.

Londoner Groves is unhappy that referee Howard Foster stopped a fight he had been winning by a stretch. He had dropped the champion Froch in the first round and continued through the fight to hit the tough Nottingham champion with everything. But Froch was still coming and looked to be getting back into the fight as we entered the 9th round. The controversial ending occurred when Froch caught Groves with a combination of punches that stunned him and as Groves backed to the ropes ‘The Cobra’ sensed his moment and pinned the challenger back. Groves was hurt but alert and has he was trying to respond back when the referee stopped the fight to his, Froch’s and boxing’s disappointment.

Groves’ appeal for a rematch was later granted, when the IBF agreed the fight was not officiated according to the rule book and in a statement agreed with Froch and his team that the contest was ended by ‘An improper stoppage.’  “The panel determined that the referee gave appropriate warnings to both fighters but did not choose to deduct points. The panel felt that in the ninth round, Groves should have been allowed to continue as he did not appear to be seriously hurt – and was counter-punching and attempting to move the action away from the ropes at the time of the stoppage. In addition, the referee waved off the fight from behind Groves instead of in front of him and did not look into his eyes. Groves showed no signs of being hurt after the stoppage. In sum, the panel felt it was an improper stoppage.”

So Groves the former British and Commonwealth champion got what he and it seems the majority of fans wanted and now will use the same evidence to have the ‘0’ be put back on his record, when the UK governing body hear his case later this month. Groves’ record is currently 19-1, 15KOs

“It’s really important to me that the Froch fight is declared a no contest,” Groves told Sportsvibe.

“I’ve never had a loss against my name before and I have no intention of ever having one in my career.