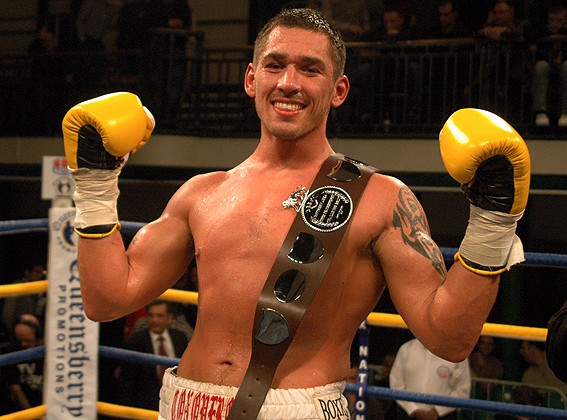 Romford cruiserweight Tony ‘The Conqueror’ Conquest takes the first step towards building an empire when he challenges for the vacant Commonwealth title at the York Hall, Bethnal Green this Saturday (22nd February).

The 29 year old gas engineer proved he lacks nothing in heart and balls when – shortly after being stopped inside a round by Rotherham’s Neil Dawson – he scrambled up off the canvas twice to outgame Canning Town’s Wadi Camacho over 10 rounds in October.

The Jason Rowland coached stylist will need to replicate the skill, desire and fitness he displayed that night if he’s to get coronated this weekend. Aussie opponent Daniel Ammann, known as ‘The Doberman’ has more than double his experience, is a multiple Australian champion and has dabbled in world class.

In December 2012, you were flying; unbeaten in 10 pro fights and world rated by the WBO. But you were wiped out in a round by Rotherham’s then relatively unknown Neil Dawson. What went wrong that night? How do you account for the loss?

A lot was going on behind the scenes. I didn’t warm up as I should’ve in the changing rooms and I got caught cold. No excuses, Neil won the fight fair and square. Good luck to him. Now I know to do things differently. If nothing else, I came out of the fight with a bit more knowledge than I went into it.

Physically, the damage was negligible. I wasn’t in there long enough to have taken a beating. But mentally, I was in a terrible state and I’d be lying if I said it didn’t affect me. My confidence and morale were very low and my friends didn’t really know what to say to me.

But I gradually came to terms with it and just like when I lost in a round to Leon Williams in the ABAs, I emerged from it a stronger, better fighter.

Retrospectively, might that defeat have proved a blessing in disguise?

Quite possibly. After just ten pro fights and not much amateur experience, I was probably further ahead than I should’ve been. You have to wonder what might have happened to me next had I won the Dawson fight. I was forced to grit my teeth, rebuild and I’ll come back even stronger.

How do you expect Dawson to fare when he travels to Newcastle to challenge British champion Jon-Lewis Dickinson in late March?

I certainly don’t see it as the walk in the park for Dickinson that a lot of other people seem to. Jon-Lewis is a good technical boxer but he can be drawn into a ‘tear up’ and Dawson can certainly punch.

But Matty Askin showed the blueprint on how to beat Dawson (stopping the Tyke in six rounds of a March 2011 Central Area fight). Neil’s engine blows out after five or six hard rounds. Provided Dickinson can keep it long over the first half I expect that he’ll win on points. He’s got better boxing ability and also has that championship pedigree of having been the full 12 rounds which Neil doesn’t have yet.

After easing back with a one round blowout over a Czech import last September, you forced your way back into contention by rising from the canvas twice to outpoint Prizefighter winner and one time English title challenger Wadi Camacho over 10 rounds in a British eliminator London’s O2 Arena last October. Your future options would’ve been very bleak had you lost. What was the pressure like, going in?

Not too bad if I’m truthful. Even some of my friends confided after that they expected me to lose. Wadi was coming off his Prizefighter victory – where he’d seen off some of the best domestic names –  and was flying at the time. But I was very keen to get straight back into the mix.

I’d known Wadi for a good ten years. We were quite friendly but he’d always wanted to knock me out when we sparred together back in the amateurs. Back then he was a couple of divisions heavier than me.

Things went a bit ‘wobbly’ in the build up when he said some unpleasant things about my girlfriend. He apologised after the fight.

What was going through your mind after you’d been dropped in each of the opening two rounds?

Just to grit my teeth and stay in the fight. I’d beaten plenty who were physically stronger than me before, in both the pros and the amateurs.

I knew I had to just get through the rounds then gradually start to push forward myself. I knew that if I could take it to the later rounds I’d outfit Wadi and outbox him. Though I was four points down after just two rounds, by the end of the sixth I was smiling in the corner whereas Wadi was blowing through his arse. By that stage I knew I was in charge.

Wadi didn’t move his head so I decided to move it for him! By the end I was hitting him with triple right hands.

Given the evidence of the Dawson and Camacho fights, how would you answer critics who cast dispersions upon the strength of your chin?

I don’t think there’s too much wrong with it. The only two stoppage losses I’ve had – pro or amateur – were to Leon Williams and Wadi, and both caught me cold in the first round.

Dawson and Wadi would both have been weighing about 15 stone inside the ring on the night. Both are very heavy hitters and both had little 10 ounce gloves on. Wadi has a monster (southpaw) left hand and Dawson was like being hit by death from above! Any cruiserweight hit clean by those two will go over.

You share the gym with unbeaten Southern Area super-feather king Mitchell Smith who many are talking of as one of the very best prospects in the UK. What makes him so special?

Though Mitch is a lovely kid outside the ropes and looks like a sweet little choir boy, he’s a right spiteful, vicious little sod in the ring……and that’ll get him places. I wish I was a bit more like that. I move him around in sparring and, though I’m five stones heavier, he always wants to hurt ya!  He’d fight me no problem if he thought he could get a belt out of it. He’s fearless.

Mitchell’s such a natural fighter. His movement is brilliant. He can lead off with uppercuts and his variation is just a joy to watch. He’s also very clever defensively with that little shoulder roll. When he’s in shape, I study him in the gym and I’m in awe of what he can do.

You’ve made no secret of the fact that your main goal in boxing is to win a Lonsdale Belt outright. Securing the Commonwealth title on Saturday night would certainly fast track you into a dual title clash against the winner of Dickinson-Dawson. Is that the plan?

Yeh, it’d certainly serve as a nice bargaining chip. I’ve always said I want to prove myself the best in Britain before trying to conquer Europe and the world. That 24 piece Lonsdale Belt is the business and I want one to keep. That’s the plan.

First, of course, you have to negotiate Mr Ammann at The York Hall on Saturday evening. How has your prep gone?

Fabulously. I’ve been constantly in the gym since I started training for my tune-up for Camacho back in September. I took a week off after Wadi but have been ticking over since and hard at it for the last eight or nine weeks. As always, I’m fit and ready for 15 rounds.

Have you done anything differently?

I’ve made my runs shorter but faster paced. Since the Camacho fight, I’ve also taken on board a new strength and conditioning coach called Joe Reemer. I work with him twice a week. We don’t do heavy weights but explosive movements and fast repetitions. He’s really got me putting my arse and hips behind my shots. He’s filled me with a lot of confidence.

I’ve also benefitted from some world class sparring with Billy Joe Saunders – who’s not only a southpaw like Ammann but who also has fantastic speed and movement – and (ex world middleweight challenger) Andy Lee. Both are top quality. If I can catch them, I know I’ll be able to catch Ammann.

What have you been able to find out about Ammann?

I saw him in a recent 10 round win in an Australian title fight and I saw his knockout loss to Brad Pitt when he just got caught with a good shot. I know from experience that that can happen to anyone.

A lot of the footage I’ve found of him on You Tube is quite old but, though he’s a bit rough around the edges, he knows what he’s doing and he’s a good all round fighter. He’s plenty tough. Like all the Aussie fighters, he looks like a scaffolder! We’re certainly not taking anything for granted.

How do you envisage the fight panning out and why are you confident that your hand will be raised at the end?

I’m not too sure what type of fight to expect but I’m prepared for every eventuality. You can watch as much video footage as you want but top fighters rarely fight the same way twice. They adapt to different opponents.