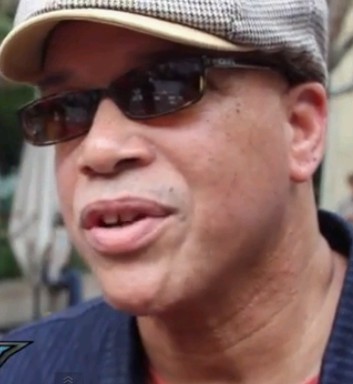 A young Amir Khan (right) with No1 boxer Floyd Mayweather Jr, Khan could soon be sharing the ring with him on May 3rd

Amir Khan or Maidana? In light of Floyd Mayweather deciding to let his 4.6 million Twitter followers decide who he fights on May 3, Amir Khan’s trainer Virgil Hunter responded by saying his boxer is ready to take that fight and deserves it more than Maidana!

Mayweather posted a pic on his Twitter feed today that featured both Amir Khan and Marcos Maidana with the message, “I’m going to let the fans decide. Tell me who I should fight next. Khan or Maidana?” view here

Amir Khan on alert as Floyd Mayweather asks Fans, Who Next?

“With the exception of the tenth and eleventh round, he beat Maidana convincingly, put him down, hurt him, beat him up. He had a rocky tenth round he had a shaky eleventh round but he survived and he won the fight.

“So lets put it this way, he beat Maidana and Maidana beat Broner, so does Maidana deserve the fight, because he beat Broner? I don’t think so!” said Hunter.

Referring to Khan as a horse, Hunter believes that if Amir does get the biggest fight of all and the Bolton man applies himself correctly during training, then he is capable of running the race with Mayweather and his youth and speed can overcome the No1 pound for pound boxer. It is a fight he believes Khan deserves and they would jump at the chance to upset the odds and test the higher IQ of the unbeaten Mayweather.

Hunter who also trains Andre Ward, regarded after Mayweather as the second best pound for pound boxer around knows his stuff, and even though he says Khan could beat Mayweather, he says he has also warned Khan, that if he didn’t apply himself correctly in preparation for the fight, then Mayweather could take his confidence away and finish his career.

“The bottom line is, did the horse want to practice like he should? Amir has come to two camps already, he’s been practising on the things he needed to practice on and has a result of that he’s gotten better, so it’s going to be a really interesting fight.

“I was very truthful with him about that fight and I let him know that if he doesn’t apply himself for that fight it could really disrupt his career, maybe finish his career, because it would take his confidence completely away.

“I also let him know that if he applied himself, he has the ability to take it to another level, a level that he didn’t even know he could fight on and that’s the goal that were reaching for, to take him to another level in his own mind.

“He’s not gonna match Floyd IQ wise, Floyd’s been in this business a long time, so you have to add his (Khan’s) attributes, with his youth, speed and just making sure he’s conditioned to the point that I could look him in his eyes before the bell rings and tell him, your ready to win this fight, you’ll win it and let youth take it’s course.”