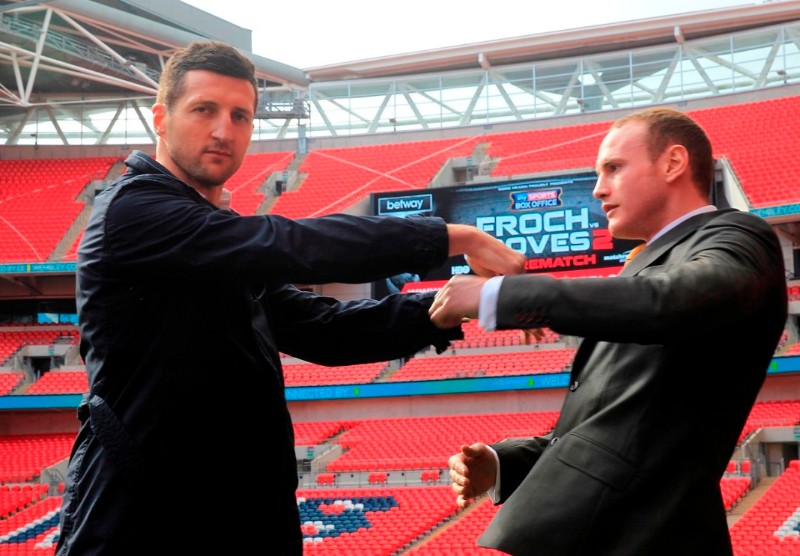 Carl Froch and George Groves renewed their rivalry today at the first press conference for their rematch at Wembley connected by EE on May 31, live on Sky Sports Box Office in association with Betway.

60,000 tickets for the fight were sold within the opening hour of going on sale at midday, the same time that Froch and Groves came face-to-face at the national stadium for the first time since their epic clash in Manchester in November, when Froch climbed off the canvas in the opening round to stop Groves in the ninth.

Tempers flared when the pair posed for pictures pitch side as Froch pushed Groves, and the Hammersmith man told Froch that he was already in pole position after getting the rematch and having it in the capital.

“Carl didn’t want to take this fight and that’s round one for me,” said Groves. “Round two is that we’re here in Wembley, my home city. Carl has to travel here from Nottingham and fight me in front of my home fans. The first fight we went in believing, now we go in knowing, and more importantly, Carl Froch knows there’s nothing he can take from the first fight, he was totally spent.

“It’s a change of guard on the biggest stage in London, in what could be the biggest fight in British boxing history.”

Froch enters the ring in his 12th World title fight and the Nottingham star said he has learned from their first bout and will not take the challenger lightly this time.

“The last time I have felt this mentally switched on, focused, happy and confident was before I fought Lucian Bute, and we all know what happened there,” said Froch. “It doesn’t get any bigger than this, I’m so excited to showcase my skills in Wembley Stadium and on Sky Sports Box Office – it doesn’t get better than this.

“Mentally it was difficult for me to fight somebody who has never fought anyone in the top 15 in the world, everybody is telling you it’s a mismatch and you are going to wipe the floor with him, eventually you start listening to it and mentally take a back seat, and mentally I was not at the races. I won’t make that mistake again, I was at fault for that and I won’t make that mistake again.