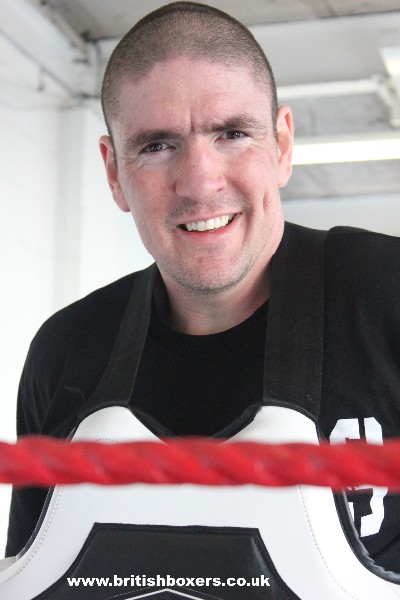 Arnie on the Pads and Body Belt with Paul Butler

Matthew Hall, 29, is the former Commonwealth light-middleweight champion and two time British title challenger. Nicknamed El Torito (Little Bull) Hall lives up to his name in the way he fights, he is one tough competitor. Arnie says he is the type of boxer to ask when given a fight, when it is, not who it’s against, he’ll get in with anyone!

In his last , Hall moved up to middleweight to challenge unbeaten British/Commonwealth champion and unbeaten star attraction Billy Joe Saunders. Hall put in his usual hard shift and pushed Saunders the championship distance but lost a wide points margin.

But Hall is back in the gym and raring to go again, lack of opportunities at light-middleweight though have forced him to consider opportunities at middleweight and his next fight will be against British based Pole Gregorz Proksa. Former world title challenger Proska took the European belt back off Kerry Hope in July 2012 after previously losing it to the Merthyr Tydfil man four months earlier. He then went on to challenge Gennady Golovkin for the WBA and IBO middleweight world titles and was stopped by the unbeaten Kazakhstan super star in the 5th. He came back with a win and in his last fight was outpointed over 10 rounds by Sergio Mora.

Hall will hope to capitalise on Proksa recent dip in form and will look to roll back the years with a win on Saturday 19 April, in Manchester on the undercard of Scott Quigg’s WBA World Super Bantamweight title defence against Nehomar Cermeno.

Paul ‘Baby Faced Assassin’ Butler, 25, is the current British, Commonwealth, WBA/WBO super-flyweight champion, with a record of 14-0, 7KOs. The Ellesmere Port man steps up to Bantamweight on Saturday night  (March 8th) when he moves up to Bantamweight to challenge for the vacant WBA Inter-Continental Bantamweight against Argentinian No3 Oreste Bernabe Nieva, who is the reigning WBC Hispanic bantamweight champion, has never been stopped in 19 fights and his 2 close points defeats came over 6 and 8 rounds against quality opposition in Argentina, so he could prove to be a tricky foe for Butler in his first fight at the bigger weight.

But Butler has big plans at this bigger weight and as well as his usual training regime with coach Arnie Farnell he has recently employed the services of a strength and conditioning coach and says he is feeling stronger than ever for his assault on a world title and a potential British blockbuster against current IBF Bantamweight champion Stuart Hall. Hall who won the vacant belt against Vusi Malinga at the end of 2013, makes a voluntary defence against Martin Ward on March 29th in Newcastle and if as expected Hall comes through that one, the ‘Baby Faced Assassin’ wants Hall next.

Matty Fagan, 25, has had 4 professional fights to date, all wins. The Ellesmere Port mans next fight is against Gloucester’s Andy Harris on Saturday 8th March at Aintree Racecourse in Liverpool, on the undercard of stable mate and friend Paul Butler this Saturday night (March 8th)

Featherweight Ciaran McVarnock from Belfast is a roofer by trade but gave it up to concentrate full time on boxing. He moved from his home in Northern Ireland last February to Manchester to get away from distractions and to concentrate 100% on his career. He hooked up with Arnie Farnell and in December he made his professional debut against Spaniard Ivan Ruiz Garrido at the Echo Arena in Liverpool. McVarnock doesnt have any fights lined up but Arnie rates him very highly and hopes to have him out again soon.

Kofi Yates, 21, is unbeaten in his first 5 pro fights and is an exciting pressure fighter who is always involved in a good fight. Yates has been spending some time in Marbella recently at Matthew Macklins MGM Gym sparring and will box on one of their MGM Shows in Birmingham on March 14th.

Gallery of Pics from Arnies Gym by www.britishboxers.co.uk – March 3rd 2014