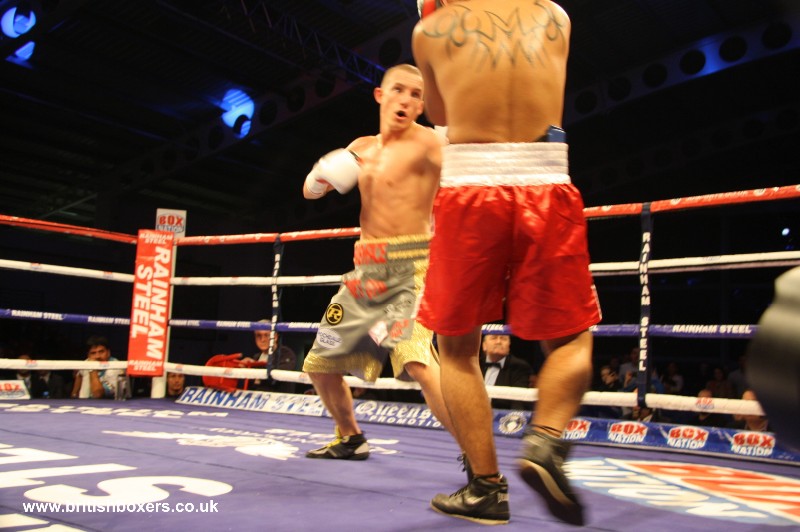 Unbeaten Paul Butler made it 15 wins on the bounce after scoring a 4th round KO over Argentinian Oreste Nieva to claim the WBA Inter-Continental bantamweight title at Aintree on Saturday night.

Paul Butler celebrates the win with his coach Arnie Farnell

Butler, 25, the current British and Commonwealth super-flyweight champion and also holds the WBA and WBO Inter-Continental belts at super-fly although he is expected soon to give up all them titles to stay at bantamweight. And that seems like a good decision because against Nieva he looked strong and powerful with the added pounds, it didnt slow him down in-fact he looked faster and his shots were thudding off his opponent.

Butler went to work early with body shots and continued to attack downstairs, setting the shots up well behind a good jab and tight defence, while switching with great effect to the open ribs of Nieva.

After softening Nieva up for the first 3 rounds, Butler pounced in the 4th and went to work brutally on his out-gunned opponent. Another left hook to the ribs and the fight was over with Nieva left in pain on his back.

It was an impressive performance from the ever improving Butler who will now chase a world title shot at bantamweight against IBF champion Stuart Hall.

On the undercard there were wins for Kevin Satchell, Terry Flanagan, Thomas Stalker and Ryan Farrag…