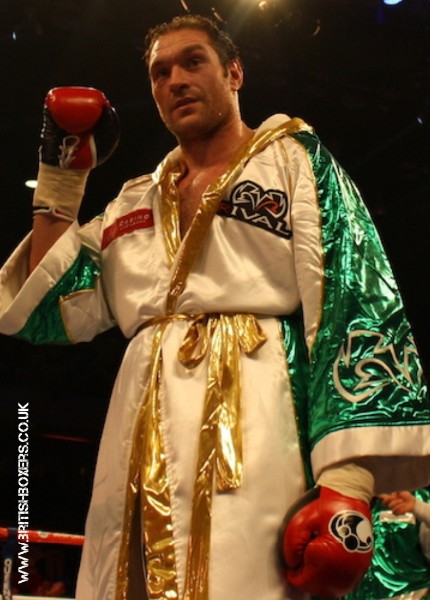 Tyson Fury says it’s case of who gets to the world title first between him and Billy Joe Saunders as to who becomes the first world champion from the travelling community.

The Wilmslow heavyweight was in Newcastle on Saturday to watch fellow traveller Martin Ward challenge for Stuart Hall’s IBF World Bantamweight title and if he would achieve the feat, but the fight ended in a technical draw after a clash of heads in the first round resulting in Ward receiving a bad cut under his right eye and the referee calling a halt in the second round.

Now Fury has his eye on creating history and is only one fight away from a shot at WBO World Heavyweight Champion Wladimir Klitschko if he can get past big-hitting rival Dereck Chisora on Saturday 26th July at the Phone 4 U Arena in Manchester in their Final Eliminator showdown.

Also hot on the heels of a world title fight is the undefeated British, Commonwealth and WBO International Middleweight Champion Saunders who must first challenge for the European title against champion Emanuele Blandamura on May 17 with a potential world title challenge later this year.

Fury said, “It was a disappointing end to a fight which was warming up nicely.  We’ll never know the outcome of it now which is a great shame.  It was a bad cut, but Ward’s a true fighting man and he would have fought on regardless of the cut.  It’s not the first time it’s happened in a world title fight and it won’t be the last.  I really feel for Martin, he’s worked hard for the opportunity and I just hope and pray that he gets back into a position to challenge for the world title again soon because he’s a quality, quality, fighter and he deserves it,”

“That leaves it open for me to make a run for the world title.  I know that Billy-Joe wants it bad as well, it’s a case of who gets their first.  Billy is a top fighter and he’s going to achieve lots of great things in the sport.  Marking my name in the history books as the first ever world champion from the travelling community is a massive motivator for me.  Regardless of who gets there first, how fantastic would it be to have two world champions travellers’ from this country?”

“I’m two fights – including my gym bout and Chisora – away from fighting Klitschko for the world title unless he does a runner but he can’t this time and he’ll be forced to fight me.  It all sound so simple and if boxing was simple it would be a dream, but that’s the plan and my route.  Anything can happen, it’s a hard road to the top of the mountain and I can now see the summit.”