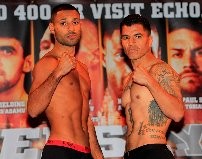 Kell Brook insists tomorrow night is the most important fight of his life and that he’s not thinking about his summer World title shot as he faces a ten-round clash with Alvaro Robles at the Echo Arena in Liverpool, live on Sky Sports.

Brook tackles the dangerous Mexican knowing that his next fight will be for the IBF Welterweight crown in the summer after the IBF stated that champion Shawn Porter or his next opponent Paul Malignaggi must face mandatory challenger Brook by July 19 after the Ohio champ clashes with the charismatic New Yorker on April 19 in Washington.

BROOK BOOSTED BY IBF RULING AS BELLEW LANDS AT CRUISERWEIGHT

The Sheffield star says that the IBF ruling has come at the perfect time for him to focus on Saturday’s battle with the visitor who holds 15 KOs from 17 wins after a tough period for the 27 year old with three World title clashes with former champion Devon Alexander called off through injury to both fighters.

“When I heard the news I was ecstatic,” said Brook, who scaled 10st 11lbs 6oz for the 10st 12lbs contest. “I have to have a World title fight by July 19 and that’s got me buzzing. I have dreamt about that World title fight since I was nine years old it’s around the corner.

“It’s been a tough ride the last 18 months or so. People don’t see what goes on behind the scenes in the training, the early runs, the nosebleeds in training, the fat lips from sparring and the diets. They only see you on fight night under the bright lights, not the sacrifices that top boxers at this level have to do. It’s been hard but I can see that the future is bright for me.

“Alvaro looks rough and ready but I’m excited about getting back in and being smart, precise and taking him out.”

Tony Bellew makes his bow at Cruiserweight against Valery Brudov tomorrow night as the headline act and he looked in great shape as he tipped the scales at 14st 11lbs 8oz, with the Russian at 13st 10lbs 3oz.

Live on Sky Sports 2 from 7pm

*Fielding over the championship limit. He is stripped of the title which is now vacant and can only be won by Adamu.