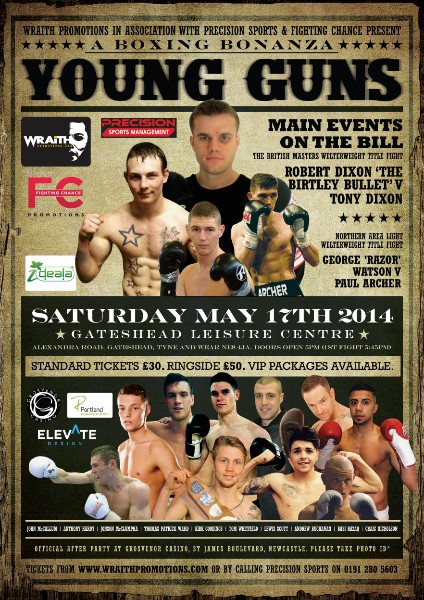 Andrew Buchanan and Anthony Hardy are the latest names added to Wraith Promotions’ next outing on May 17 at Gateshead Leisure Centre.

Buchanan will fight a six rounder against Jason Ball, and Hardy will be looking to maintain his 100 per cent record with four rounds against an as yet unknown opponent.

Anthony Nelson has had to pull out of the show due to a bereavement, as has Jordan King who has signed a six fight deal with Dennis Hobson.

“We are delighted to have both Andrew and Anthony on the card,” said promoter Wraith.  ”Both have an attacking style and a never say die attitude.  They are natural boxers and entertainers and are worth the entry fee on their own.

“Losing Nelson and King would have been a big blow to a show a few years ago but there is a lot of talent out there wanting to box so the withdrawals have opened the door for others.

“We wish Jordan well on his chosen path and our thoughts are with ‘Nella’ as he grieves over the loss of a close friend.”

” Sponsors are always key for small hall shows and we’re delighted so far to have pulled in Ideala, Portland, and Grosvenor Casino who will be staging the after show party.  Gateshead Council have really bent over backwards to help us stage this show at the Leisure Centre which is one of the best facilities in the North East for boxing.

“We are on the final furlong now with 12 top class fights, two of them title fights, and I’d urge fight fans to pack the place out and support the local lads.”

For more information and to buy tickets visit wraithpromotions.com