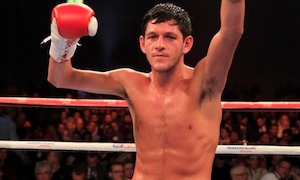 Jamie faces Na Rachawat for WBA title on May 31

Jamie McDonnell will face Tabtimdaeng Na Rachawat for the vacant WBA Bantamweight title at Wembley Stadium connected by EE on May 31 live on Sky Sports Box Office in association with Betway.

McDonnell faces the Thai star on the undercard of Carl Froch’s blockbuster rematch for the WBA and IBF World Super Middleweight titles against George Groves.

The former IBF champion from Doncaster won his first World title on May 11 on home turf at the Keepmoat Stadium against Julio Ceja and will bid to regain World champion status against the 30 year old former PABA champion who has racked up 52 wins with 34 inside the distance.

McDonnell has boxed twice since beating Ceja with a pair of wins in eight-round clashes in November and December, and the 28 year old says he cannot wait to get the chance to box for a World title once again on an historic night in London.

“I am so excited to be fighting for a World title on the biggest boxing show in British history,” said McDonnell. “I’m honoured to be a part of it and especially to be fighting to become a World champion again, I am absolutely flying with this news and it’s going to be a great boost in training.

“It’s been a full year since I last fought for a World title and it’s been tough to be honest. I had a little taste of being a World champion, I loved it and it made me want it even more. Reaching the top of the world changes your life and I want to feel that again.

“I don’t know much about Na Rachawat and I will leave that to the team. His record says he can bang a bit and he is a come-forward fighter who is game, so it will be an entertaining fight as that suits me. I’m expecting to win and win well.”

“I’m delighted to deliver this opportunity for Jamie on a huge night for British boxing,” said Hearn. “It’s going to be a tough night for Jamie but no one deserves a shot more in the division and I’m excited about watching him win his World title back.”

McDonnell’s clash with Na Rachawat joins a top-class undercard on May 31 with James DeGale MBE facing Brandon Gonzales in a final eliminator for the IBF crown contested by Froch and Groves while Olympic Heavyweight sensation Anthony Joshua faces a step-up in his sixth pro fight.

A further allocation of tickets will be released on sale soon and fans can register for updates at www.MatchroomBoxing.com