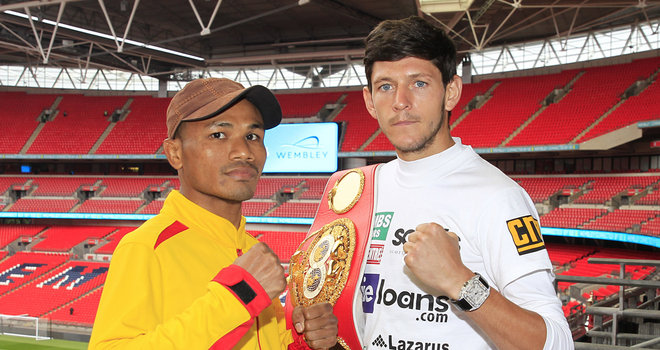 So here we are, fight week.

Unless you have been residing under a rock or in the International Space Station orbiting our planet, you would have found it nigh on impossible to avoid the frenzy this weekend.

Whilst most will tune in to view the main event, we shouldn’t overlook the fights on the under card which contains some of Britain’s biggest and brightest talents.

Whilst some criticism has been levied at Matchroom for not finding a more attractive opponent for the Olympic Gold Medallist, it is becoming increasingly more challenging to locate willing suitors to face him.

Michael Sprott so I’m told was a strong contender to face Joshua but with him due to face Martin Rogan in New Zealand next week it was a non starter.

More important than the opponent is the chance to box on the biggest spectacle in British boxing history, something Joshua cites as bigger than the Olympics.

“I’m starting the show but hopefully one day I’ll be headlining. I hope to start the night off with a bang. I’ve got a domestic fighter who’s coming to give it a go. He’ll be trying to catch me so may the best man win.”

With the opportunity for him to not only box in-front of 80,000 the exposure he will receive being shown on HBO Boxing Stateside will do wonders for his growing his profile.

Na Rachawat has boxed his whole career in Thailand and I’ve heard he is an aggressive, come-forward pressure fighter.

My concern with him as an unknown quantity is the level of opponents he has faced.

“You can expect the best of me. I want to put in the best performance I have ever done, especially in front of all these people,” he told the Ringside Toe 2 Toe podcast.

“When I win a world title back, it’s a stepping stone. I want to unify this division before I move up, so it all happens on the 31st at Wembley.”

29yr old Mitchell will be have a huge fan-base present on Saturday evening as he bids to make it 3rd time lucky on the World title trail.

Having lost to Australian Michael Katsidis and now stable-mate Ricky Burns, some would argue that this is Mitchell’s last chance to release a boy-hood dream of becoming world champion.

Having spoken to people around The Hammer, he is more focused and determined than ever before. The penny has well and truly dropped for him, he knows this is his time, the chance to showcase to the world what he is capable of.

Mentally & physically he is in the shape of his life, you only had to see the zip and snap in his punches yesterday at the open work-out.

Mitchell is living the life of an elite athlete now, taking his nutrition and boxing much more seriously.

Inheriting the “senior” fighter status in the gym since rejoining Tony Sims last summer, he has the bit between his teeth and I’m looking forward to seeing a sparkling performance from him in his home-town Saturday night.

“It’s a great opportunity for me. It’s a world title eliminator and after this I’ve got Vazquez in my sight. What a platform to do it on – it’s the biggest show in history

“I’ve put my whole year into this training. I’ve made my comeback properly, training solidly for a year and having regular fights for Eddie Hearn with Tony Sims, who’s been working wonders with me in the gym.

“I’ve been sparring the likes of Martin Ward, Ricky Burns. It’s been going brilliantly. All the boys like Anthony Joshua are alongside me in the gym. I’m flying for this fight.

“Everyone’s buzzing. We’re happy. You’ve got to work hard in this game and working alongside other athletes like that shows you how hard you have to train. We’re all working harder to get faster times and it’s great.

“I’ve seen quite a few fights of Maduma’s and he likes doing things his own way. He’s got fast hands and I imagine he’ll be very fit for this fight but if it has to be a war, that’s how it will be.

“I’ve been in a few wars. I’ve been beaten in two but I wasn’t prepared for them. Trust me, when I’m prepared the way I’m prepared now, I’m ready for whoever it has to be.

“It’s a once-in-a-lifetime crowd. I don’t think we’ll ever see it again. I said to Anthony Joshua a couple of months back that the only person who could get this kind of crowd again would be him in a few years’ time for titles at world level.”

Supporting the main-event and with one eye on the victor is James DeGale, another local lad who like Mitchell is a whisker away from a World title shot.

Gonzales trained by Virgil Hunter regularly spars with Andre Ward and isn’t travelling to London to sit on an open-top-bus with his bum bag taking pictures of Buckingham Palace.

They are coming to win and DeGale needs to deliver…. massively.

Having boxed in small arena’s in Lakeside predominantly, “Chunky” feels he is returning to stage where he belongs.

He would admit himself that since the narrow defeat to Groves, his profile reduced dramatically and the move to Matchroom has been long-overdue.

Initially focused on the WBC path and a showdown with Sakio Bika, he has now wisely pursued the IBF route as a fight against Froch or Groves rematch would fill Phones4U Arena in Manchester or the O2 with ease.

“Flawless” hasn’t knocked an opponent out since 2010 and I fully expect him to take the fight to DeGale for the full 12 rounds.

I fancy DeGale to outbox Gonzales down the stretch and take a split decision.

“He surrounds himself with good talented people like Amir Khan and Andre Ward, is trained by a good trainer in Virgil Hunter so I’m up against it but training camp has gone great.

“I’m injury free, mentally on point and as Eddie Hearn says, I’ve got my mojo back. I’m feeling nice and I’m ready to do it.

“I needed the right person to push me there and shouts to Eddie and Matchroom Sports with Team Chunky. We’re doing it big and I just can’t wait for Saturday night. It’s going to be a hell of a show so whoever’s got tickets, fasten your seatbelts.

**Tune in Friday for my breakdown of the main event…. Do not miss it!**

To follow the full build up to the Froch v Groves 2 fight, video interviews and footage including the Wembley undercard, we have teamed up with iFLTV to have all there videos featured on British Boxers website on the home page and on their own page on our site. Updated instantly, you can watch all iFLTV’s videos in one place.