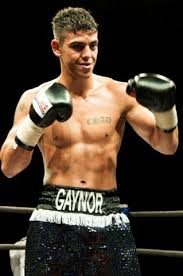 It was a step up in class for Rotherham’s welterweight prospect Chad Gaynor when he faced former English champion and British title challenger Adil Anwar on Friday night at the Sheffield Ice Rink on a Coldwell boxing show. But it was a step up that proved fruitful and the correct decision for Gaynor and his team, he knocked out his Yorkshire rival in dramatic fashion at 1:58 of the 2nd round with a perfectly timed right hand followed by a left hook.

The dramatic KO was unexpected and shocking as paramedics and officials rushed into the ring to tend to the stricken Anwar, who had fell dramatically face first to the canvas. After a couple of tense minutes and some oxygen, Anwar sat on a stool in the middle of the ring and began to recover and come back to his senses.

Gaynor, 23, won the International Masters belt on the night and the future looks bright for this tidy boxer who carry’s fight changing power as well as slick skills and other than the solitary loss to Glenn Foot in Prizefighter semi final (UD3) he has an impressive winning record of 15-1, 8KOs.

Anwar, 26, from Leed’s started the first round well and looked to set the pace behind his jab and appeared to take the opener. The fight had all the makings of being a close nit affair and a ten round battle was perceived. It was Gaynor’s first attempt at the ten round distance but he wasn’t hanging around, the finish was unexpected and is a terrific win for Gaynor and his future projection into domestic title contention.

For Anwar (record now: 20-4, 7 KOs) this was a big setback for him, the first time he as been defeated by stoppage. He lost in July last year against Darren Hamilton in a British title challenge and then two month’s later dropped a shock four round decision to Simone Lucas. He was coming off a four round points win against Laszlo Fazekas coming in but will now have to have a think where he goes from here and as a rebuilding job on his hands if he is to get back in the mix.

Promoter Dave Coldwell speaks to iFLTV about the show which he gave 12 out of 10!