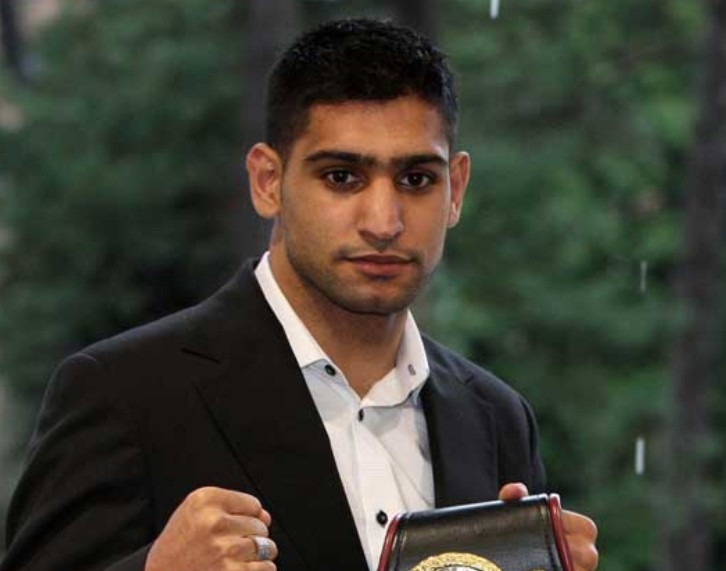 Khan: “If I lose this fight, then that’s the end of the Floyd Mayweather fight.”

“We’re going into this fight to steal the show, that’s what we’re going to do.” Khan said.

But Mayweather’s choice of opponent for this May 3rd fight, could be a blessing for Khan who will be campaigning at the 147lb welterweight class for the first time. Khan believes even though Collazo is a tough test, by taking him on in his debut at welterweight as appose to going straight in with Mayweather, is now in hindsight a wiser move.

“I think that gives me a chance to get into the 147 division and get my feet wet, and get to feel what it’s like fighting in this new category, where I’m not killing myself making weight,” Khan added.

“It’s good to test the waters first. And Luis Collazo, it’s not exactly testing the waters against him, it will be a tough fight.

“I would’ve loved to fight Floyd Mayweather, but I think maybe it’s for the best. It gives me a few fights at this weight category.”

Khan is now being trained by highly-rated American trainer Virgil Hunter in San Francisco, after parting ways with Freddie Roach and it appears it was a good move for him, as is his move upto the higher weight division. Khan had struggled to make 140lbs for his last few fights and during the final few days of camp, said he had often nearly ‘killed himself’ shedding the extra pounds.

“I feel so much stronger now at this weight honestly.” Khan said.

“We’ve worked on strength and conditioning, where normally we cant work on that very much because I’m killing myself making weight.

Khan’s only appearance above 140lbs was when he took part in a catch weight contest at 143lbs in May 2013 against Julio Diaz, He came in a pound under at 142. After struggling against Diaz and even getting dropped, he eventually went on to secure a close points decision victory over Diaz, but Khan knew then, he couldn’t make the light-welterweight limit any-more.

“My last fight was at 143lbs and I had to train three times a day to make the weight. I just felt like I had no energy in me, I never want my opponent to have that kind of advantage over me.

“A day before the weigh-in, I weighed like 14 pounds overweight, and I thought, I can’t keep doing this! I used to tell people I make the weight easy but I used to kill myself the last few days. The last seven, eight pounds just used to stay there.”

Khan’s opponent Collazo, 33, from Boston, will go in as the underdog against the Briton at the MGM Grand. The former WBA welterweight champion who lost to Ricky Hatton in 2006 is an experienced opponent and a tough test for Khan. He has won his last four fights and is coming off a good win over Victor Ortiz (KO2) And Khan knows he cannot take Collazo lightly

“I’m not looking beyond Collazo because it will be a tough fight for me. He is coming to fight because there is a lot at stake for him as well as for me.” Khan explained.

“We are ready for the best Collazo so we can put on a great performance.”