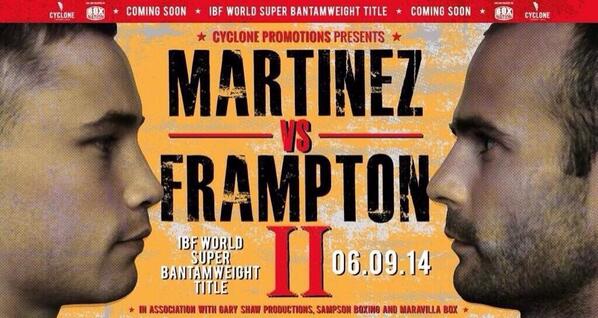 Carl Frampton has landed the world title shot he has long waited for after securing a rematch with IBF super-bantamweight champion Kiko Martinez in September, although the venue and date for the fight are yet to be confirmed; Balmoral Showgrounds are expected to host the outdoor event.

The Belfast man, 27, defeated Martinez in 2013 after administering a ninth-round stoppage of the Spaniard to claim the European title. The loss didn’t deter Martinez though and he went on to fight for, and win, the IBF world title. It was only right that he should now give Frampton a shot in what will be his third defence, although he won’t be waking up with a smile on his face prior to fight night.

Frampton, who Tweeted Martinez today to say, “Looking forward to welcoming you to Belfast again.” has watched domestic rival Scott Quigg pick up a version of the world title at super-bantamweight and has waited patiently for his moment to come, and now he stands on the verge of making his dreams come true while gathering a bigger bargaining chip if negotiations begin to stage a blockbuster fight with Quigg next year.

Frampton’s promoter – and former world champion – Barry McGuigan, has been trying to do a deal for his charge to fight WBC super-bantamweight king Leo Santa Cruz after initial talks with Martinez’s camp broke down. Cruz was not willing to travel to Belfast to defend his title and so team Frampton headed back to Spain and and were finally able to secure the fight with Martinez after two weeks of hard negotiations.

Frampton has kept busy while awaiting his chance, picking up wins and impressing in his last two fights: beating Jeremy Parodi and Hugo Cazares in good style, and he is chomping at the bit for world honours.

It’s not the fight the fans want, but it’s certainly the fight Frampton deserves. A win would almost definitely set up a bout with Quigg, which would be something we’d all love to see. Most people see Carl gunning Martinez down again at some point in their second meeting, and a world title is no less than the Belfast man deserves.