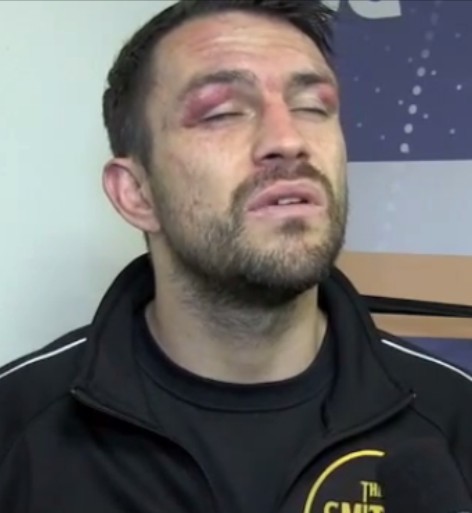 British boxing can take and has taken a good few losses on the chin over the years, when we have sent our pugilists abroad to fight for world titles and they have been clearly out of favour with the judges, despite clearly winning the fight. I am not saying Paul Smith deserved to take Arthur Abraham’s WBO super-middleweight title on Saturday night in Kiel, Germany but the scores that came back after the final bell were tantamount to criminal, embarrassing and everything that is wrong with our sport.

Smith, 31, was a big underdog going in and it was hard to imagine how he would overcome the champion defending on home soil. We knew that getting a points victory was high on impossible and that he would probably need a knock-out to win, but why should we accept this scenario? – The sarcastic saying that ‘a British boxer needs to score a knock-out to get a draw in Germany’ is still open for use in an article in 2014. I’d like to think that boxers from abroad coming here get a fair crack of the whip and our judges score a fight on what they see and not what they think they are expected to see. That is open to argument and I’m sure there are many cases when a foreign boxer has left these shores unhappy with an biased home decision.

Paul Smith started the fight positively, on the front foot he stood in range and let the shots go nicely landing to head and body, it was a fast start and he made the champion go on the defensive, behind his high tight guard. Abraham probed from behind a robot like jab, effective but nothing Smith wasn’t expecting and he stuck to his game plan well, keeping the champion working, giving him angles and hitting the veteran’s body when he got inside.

Smith was aware to not let the experienced Abraham nick the rounds by coasting and then winning the last 30 seconds to catch the judges eyes, maybe he himself wasn’t aware they were not viewing things clearly anyway, what an horrible thought to think Smith’s efforts were in vain from the off set. All his hard work assigned to the history books has a lob sided shut-out defeat, It was far from that.

All three judges gave it to Abraham, one of them by seven rounds with a score of 117-110, the other 117-111 and the third, a Spanish judge named Fernando Laguna had Smith losing 119-109, that’s 11 rounds to Abraham and just one for Smith, that didn’t tell the story!  It was a bitter ending to to a night when Smith came of age on the world scene.

Abraham, 34, looked strong, composed and when he opened up he caught Smith and looked impressive. Smith was stunned by a few shots but kept poker faced and never let up, his game plan was never wavered and he did well to set the pace and maintain it. Abraham’s jab continued to be impressive and it became his main weapon. Smith’s body attacks were consistent throughout the fight and his coach Joe Gallagher screamed orders at him to bang the champions body.

Just when Abraham had success and caught the British challenger with his thumping combinations, Smith would hit back to even things up and he winded Abraham and slowed him with the body shots on numerous occasions. Abraham used all his experience to counter and trap Smith on the ropes, his over hand right caught Smith coming in at times but the Liverpudlian’s movement got him out of the German’s traps and Smith always maintained centre ring to set about his own attacks. It was pretty much the story of the contest which should have been reflected in a close score line, a split decision, a draw, even a Smith win would not have been far fetched after his effort but to lose by such a wide margin, smarts somewhat.

There are no arguments against Abraham he is a proud tough champion and Smith’s respect for him will be more now than it was before. Smith wont kid anyone he knows that if the fight went the distance he was going to be hard pushed to get the nod but there has to be be some justice in the world.

Lets hope Smith’s representatives push for a rematch for their fighter and use the outcry from the shocked boxing public as ammunition to demand it happens. Abraham would have to be offered a kings ransom to come over to Smith’s backyard and put his title on the line but if the money men get behind it and put their money where the mouth is, then why not? – British boxing would get behind it and make it a successful venture for the promoters, but Abraham will most likely seek a bigger money unification fight or a 4th meeting in two years with fellow German Robert Stieglitz.

If Smith doesn’t get a rematch he will not be short of options now he has entered world championship level. He is still the British title holder and just one defence away from keeping the belt outright. The British super-middleweight scene has always been strong and it is just that at the minute. Carl Froch, George Groves and James DeGale lead the way with Smith just behind them. Froch may be out of reach but a rematch against the other two who have defeated Smith already, could be a legitimate target for him, although he may have to take on fellow Scouser Rocky Fielding first in a fight that would be massive for Merseyside boxing. Wherever he goes from here Smigga should be proud of himself and can return to the ring with a new added edge and the confidence he can mix it at the highest level.

Absolute nonsense, there has to be something done about these type of decisions. Paul Smith should be WBO champion tonight. Plain cheating
.
— Gary Lockett (@TheLockettMan) September 27, 2014

Them judges from last night should take a long hard look at themselves. They robbed a man of a world title. An future defence earnings
.
— Frankie Gavin ₯ (@frankiegavin1) September 28, 2014

Feel for @PaulSmithJnr fought he won that chin up champ u boxed well and done everyone proud mate deserved to be champion of the world — Haroon khan (@harrykingkhan) September 27, 2014

Why have judges if they don’t judge correctly. Robbing people of there dreams. The boxing board has to act. @PaulSmithJnr — Wayne Rooney (@WayneRooney) September 27, 2014

I dunno why people are suprised smith got robbed, anyone remember when Robin Reid bashed Ottke? Load of bollocks! Gutted for Paul smith