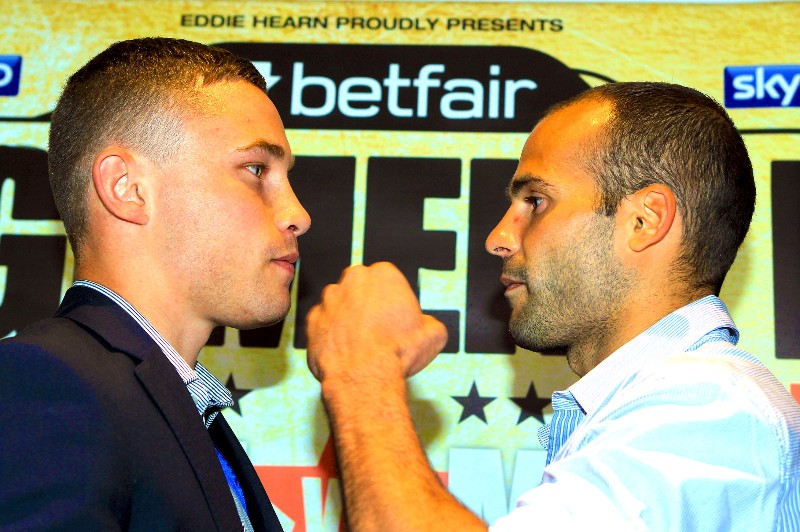 Revenge or repeat? Martinez vs Frampton

On Saturday night at the Titanic Quarter, Belfast, Carl “The Jackal” Frampton, 18-0 (13) and Kiko “La Sensacion” Martinez, 31-4 (23), clash in their highly anticipated rematch, with Martinez’s IBF super bantamweight title up for grabs.

Frampton will be hoping for a repeat performance against the dangerous Spaniard, after previously stopping Martinez in the 9th round of their 2013 EBU super bantamweight bout, inflicting Martinez to the first stoppage loss of his career.

However, since that loss to Frampton, Martinez has gone on to lift the IBF title, with a 6th round knockout over the much fancied Jhonatan Romero, and notched up successful defences over Jeffrey Mathebula and Hozumi Hasegawa. It could be argued that Martinez is an improved fighter since the pair’s initial bout.

Martinez is also no stranger to winning on the road, breaking Irish hearts once already with a surprise first round stoppage over Dublin’s No1 son Bernard Dunne. So if anyone can handle 16,000 screaming fans, baying for blood, then it could be Martinez.

Both men are also very heavy handed and possess genuine knockout power, so many will feel that the bout will not go the distance. Frampton will no doubt look to ride the early storm that Martinez is known for, and then let his superior boxing skills take over into the later rounds.

Huge nights potentially await for Frampton should he dethrone Martinez, with the prospect of unification fights against WBA champion Scott Quigg, WBC champion Leo Santa Cruz, or even the No1 in the division, WBA super champion Guillermo Rigondeaux all in the pipeline.

The fight will more than likely have its ebbs and flows, with the relentless aggression that Martinez normally provides. Frampton has more than enough spite in his punches to keep Martinez honest though, as shown in the first bout. Either way, it’s well poised for another classic.

The bout will be shown live on Boxnation.