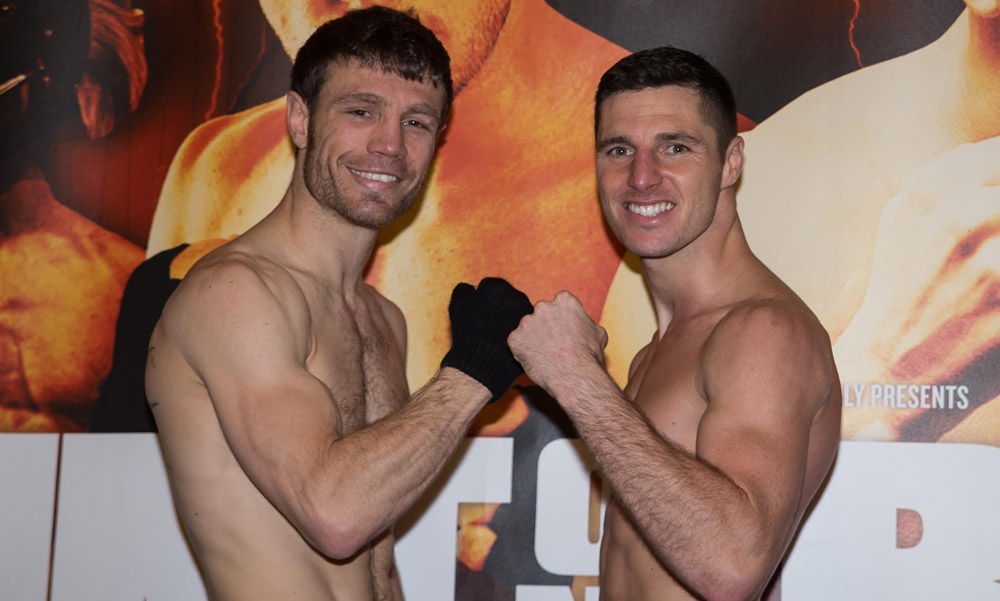 Luke Campbell MBE, Tommy Coyle and Gavin McDonnell are set for the biggest fights of their pro careers at the sold-out Ice Arena in Hull tomorrow night, live on Sky Sports. Coyle defends his IBF International Lightweight title against Australian star Michael Katsidis and returns to the scene of his fight of the year contender in February against Daniel Brizuela – who himself is back in the city to face Campbell. Coyle has confessed to being a big admirer of Katsidis, who scaled half a pound more than Coyle at 9st 8 ½ lbs today, and predicts another brutal classic on his home turf. “I don’t think Eddie Hearn likes me – he wants to see me in a war every time!” said Coyle. “This one has got war written all over it. It’s a fantastic fight, it’ll be a privilege to share a ring with ‘The Great’. I used to be a big fan of his and I still am. I’ve watched his fights for years. “When I was offered the fight, I took it straight away. I think all the boxing fans know I like to be involved in exciting fights and I’m sure this one will be another one of them. “Some of the fights he’s been in and the names he’s boxed and the names he’s beaten are fantastic, it says it all when you are headlining a bill at the MGM Grand in Las Vegas – he’s a boxing superstar. “He’s coming off a couple of wins and he seems hungry again. A guy like Michael is always going to be wanting to fight for World tittles because that’s what he is used to so I am treating it like I’m facing him at his best. He wants this as it’s his way back in and I have to be at my very best as he has so much experience in the game, I’ve got to be so disciplined. So many fighters wanted to have this fight so I am delighted to be the one getting it.” Campbell boxes for the fourth consecutive month in his ninth professional contest, and the Olympic gold medal star, who matched his Argentine opponent’s weight of 9st 8lbs today, believes he’s timed his progression right for his first major test in the paid ranks. “I’ve stayed busy, I’m active and I am thinking about what I’m doing,” said Campbell. “I am getting regular fights, boxed every month from July, and that’s what I want to do. This is why I am in the sport, to fight for titles, and at this stage in my career I can afford to fight every month, I am coming out of the fights with no marks on my face and I am beating the kids well, so why not fight again a few weeks later. This is going to be a test and it’s the first fight I am really excited about as it’s the first fight that we’re going to see what I have got. I can’t tell you what is going to happen but I am in great condition and feel ready to put in a performance to show that.” McDonnell steps onto the international scene for the first time in his career against World title challenger Vusi Malinga, and the Doncaster man – who weighed half a pound less than the South African at 8st 9lbs – is drawing inspiration from his two-time World Champion twin brother Jamie as he looks to land the vacant WBO International Super Bantamweight Championship. “I can take a lot from what Jamie has done,” said McDonnell. “He has taken every chance that has been offered to him and every time he has stepped up to the plate and won. We say take every chance and taking fights like tomorrow can only put me in a good position, you just have to come through the fight. That is why I am willing to take these big fights. “When Jamie won the World title back at Wembley it topped off what had been a tough year after everything that had happened. It took him a full year to swing it around. To do it on that show, the biggest show we have ever seen, and to win another World title meant a lot to us all. It meant just as much to me as it does to him. We were all over the moon and we went away then and he got married. It was a tremendous achievement.” Campbell, Coyle and McDonnell lead a top-class bill in Hull that is supported by a host of young British fighters. Hull’s Samir Mouniemne continues on the path back to title contention and the show also sees a showcase of local talent with Nathon Smith, Tom Knight, Charlie Payton and Connor Seymour plus Liverpool’s Robbie Davies Jnr.

Running order (subject to change) and weights (where available)