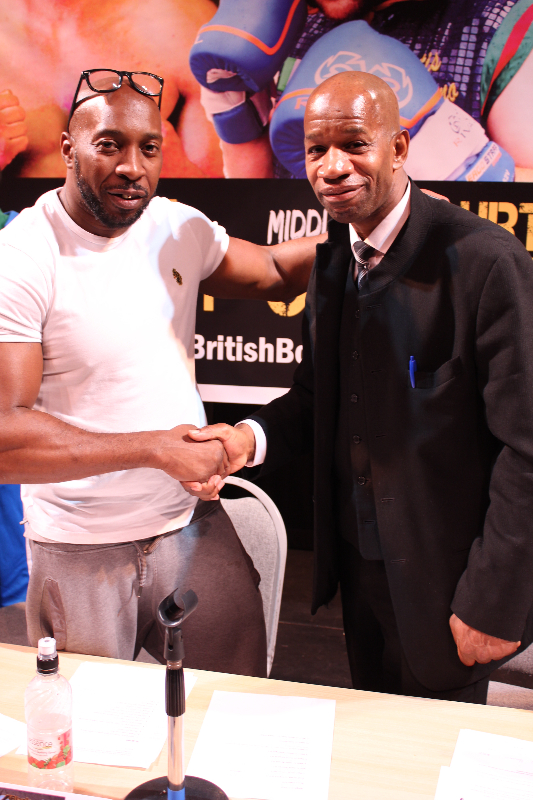 “Pat is not only a friend but also a great boxing character.  The industry needs people just like him.”

“I have been involved in boxing since I was 20 years old, during my military career and after.” Boxing manager and advisor Rick Manners told www.britishboxers.co.uk

Since retiring from amateur boxing when I saw that my brother, Nick Manners, was struggling with his then manager the renown Mickey Duff and I thought maybe I could help.  Although, at that time, I was not a promoter or held a licence I recognised that my brother was talented and that I myself would do the job of his promoter much better.  It was quite obvious that I would rub some people up the wrong way. The hierarchy of boxing would not look favourable on me as I struggled to get a foothold within the industry.  What made me take notice of the situation with Nick, former Central Area light heavy weight champion, was hearing that the legendary Emmanuel Steward wanted to take Nick back to the USA and for him to join the Kronk boxing team seeing that Nick had talent, height and a phenomenal reach like the kind of fighters they were training there at that time.  These were boxing freaks of nature, for example Thomas Hearns, Hilmer Kenty and the McCorry brothers Milton and Stevie.  All went on to become great champs in their weight classes.  I believed that Nick had been overlooked and left on the shelf whilst his team heavily concentrated on promoting Henry Wharton, the former two time world title challenger who was making big money at the time.  The best thing that could have happened for my brother as a fighter, was that I took it upon myself to help him.  Also Nick was not happy with his situation at that time and after certain issues he was released from his contract and it was handed back to him and he became a free agent.  This was the required help he needed to progress forward.  Step up Rick!

I made friends with Brendan Ingle, from the famous Ingle Winko Bank Gym.  Here I created an alliance with John, Dominic and Brendan Ingle.  These guys are powerful people in the boxing industry and they helped me to become a better trainer and promoter.  So through my brother Nick I got into promoting.  I have promoted many shows through out the years and have worked with many fighters also.  I even had my first world IBF champion professional boxer.  You may ask who? Michelle Sutcliffe of Leeds, the second female professional boxer in the UK, the first being Jane Couch.  However Michelle won her world title here in the UK.  Again you can see how I threw myself into the massive debate of women’s boxing.  The establishment did not like this however through all the trials and tribulations we triumphed.

“He fights against the odds to break into the industry as a promoter/manager/trainer solely for the benefits of his fighters.

I would class myself as a baby Al Haymon, an exclusive advisor retained by many fighters, to help and consult for them.  I know most people within the industry, among one of the many strengths required to survive and succeed.  I am able to work along side people I do not like or who do not like me and still get the job done.  This is a business that involves money, power, influence, adaptability and determination and a ‘never give up attitude’.

In addition to promoting I am also a sports journalist, writing a weekly column for Asian Express newspaper in the North of England and www.britishboxers.co.uk.  This helps me to get to the superstars of boxing for example Kel Brooks, Kid Galahad and also new up and coming boxing stars.

I met Pat through the ABA circuit when I was on the British Board of Control.  Pat Barrett is a former British and European light welter weight champion who is based in Manchester.  Pat is not only a friend but also a great boxing character.  The industry needs people just like him and also people like Tyson Fury, Chris Eubank, George Groves and all the other larger than life characters.  Actually, I admire Pat more because he went from journey man to British champion to European champion beating prospect and top fighters alike.  His do or die attitude would be worthy of adoption by some prospects today.  Pat is dedicated, disciplined but most of all self driven in pursuit of what he wants.  After all, not like some, he did get to fight for a world title.  What were the odds of that!!!  I applaud him.

To Watch Pat’s show LIVE and FREE on BBTV – Register here and you will receive the link to your email:

Now, again, Pat fights against the odds to break into the industry as a promoter/manager/trainer solely for the benefits of his fighters.  Some might say that ex fighters don’t make good promoters especially when wearing all those different hats as there is a possibility of diluting ones performance however I am confident that he will prove the doubters wrong, again.

When I heard that Pat’s forthcoming show was having problems with boxers coming off the bill I opted to jump in and help.  A friend in need is a friend indeed, a mantra I firmly believe in.  So this for me was a no brainer.  I am contributing by putting on quality kids for this show, for example, Justin Newell (International Masters champion) and up and coming top prospects Reece Cartwright and Zahid The Magic Man Hussain all quality unbeaten fighters, not just making up the numbers to put on the show.

This has been made possible and negotiated with Rebecca Margel of Bauer Events Ltd to get fighters on this show.

The show is being shown LIVE and is FREE to watch on BBTV www.britishboxers.co.uk

Below is the press conference for the October 25th Show.