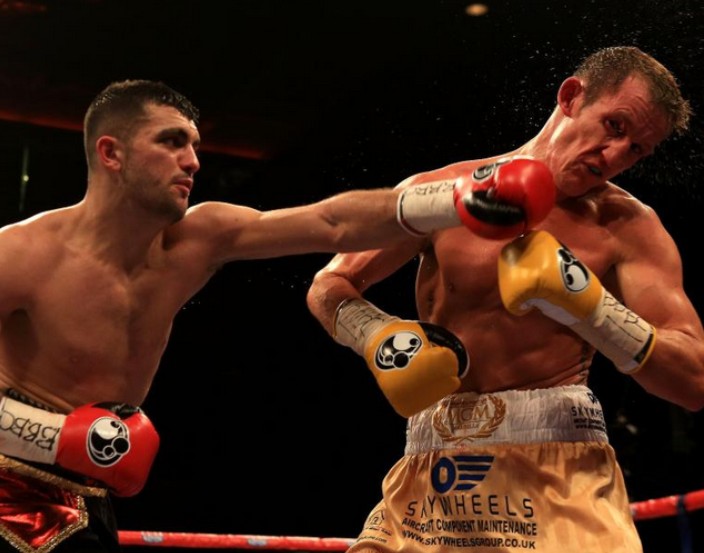 Ellesmere Port super flyweight Paul Butler showed once again why he is one of the brightest talents in British boxing, with a punch perfect display over Ismael Garnica.

‘The Baby Faced Assassin’ was originally scheduled to take on IBF Champion Zolani Tete, however hopes of becoming England’s fastest two-weight king had to be put on hold due to Tete breaking his hand in training.

Putting this disappointment aside, Butler produced a performance of the highest quality. In charge from the opening bell, Paul was showing good variety to his work, landing the jab at will and looking impressive when going to the body.

Although Garnica was landing very little of any significance, it was certainly not due to lack of trying. The few times when he did push Butler back, Butler showed equally good defensive skills, blocking and slipping the majority of the Mexican’s work before firing back with his own shots.

As the rounds proceeded, a similar pattern started to emerge. There were occasions in the later rounds when it seemed Garnica was about to buckle under the constant pressure from Butler, but credit must go the Mexican for soaking it up and showing what a tough man he is.

Sole judge referee Mark Lyson scored the bout 100-91 in favour of Butler and the Ellesmere Port man now moves on to bigger and better things with a possible rescheduled clash with Tete being lined up for February.

A clash for the vacant WBA Continental lightweight title between Derry Mathews and Adam Dingsdale saw the Liverpool man triumph in a one-sided manner with judge’s scores of 118-108, 120-106 and 119-107.

Seen as a possible banana skin for Mathews, ‘Dirty’ controlled the fight throughout, working off his pin point jab and showing all of his experience of competing at the highest level. Dingsdale was sent to the canvas twice in the second round, firstly from a sharp left hook to the temple which scrambled all of his senses. Moments later he was down again to a barrage of punches and the end seemed to be near, Dingsdale somehow scrambled his way through to the end of the round.

Mathews coasted to victory thereon, and although Dingsdale had moments of success in the seventh round, they were few and far between.

The Liverpool fighter’s dreams of fighting for a recognised world title continue.

Catterall, a betting underdog for the contest, floored Stalker twice in the opening two rounds with the Liverpool man only just beating the count in the second round.

Stalker desperately tried to claw his way back into the contest and did cause some damage to Catterall’s right eye, but the Chorley man remained calm and continued to snap back the head of Stalker with his impressive jab.

In the eighth round, Catterall landed a huge left hand that sent Stalker stumbling back onto the ropes. Catterall jumped all over his man and despite Stalkers protests, referee Mark Lyson had seen enough and called a halt to proceedings.

The Liverpool fighter became the first boxer from the city since Paul Hodkinson to lift the European title, etching his name into Liverpool boxing history in the process.

As ever, Satchell produced an incredible work rate in beating the Yanchy, keeping a high tempo throughout to win with scores of 112-117, 112-116 and a somewhat surprising card of 114-114. Satchell will now have his sights set at a world title shot at 8 stone.

Chris Eubank Jr stopped the over-matched Omar Siala inside two rounds, progressing to 18-0 (13). Eubank Jr made easy work of the contest which was essentially nothing more than a warm up before his hugely anticipated domestic showdown with rival Billy Joe Saunders next month.

Showing blistering hand speed and power from the start, Eubank Jr simply had far too much for Siala, landing a brutal uppercut which sent his man back onto the ropes, before firing home a barrage of punches. Referee Alvin Finch had seen enough and prevented Siala from further punishment.

An accidental clash of heads in the second round left Smith with a nasty cut above his right eye, yet it provided no significance whatsoever, as ‘Beefy’ dominated throughout, dropping his man with a trademark left hook to the body before finishing Sera off moments later. The Liverpool fighter will now continue his path toward world honors

Elsewhere on the bumper night of action in Liverpool, there were routine victories for Liam Williams, Jazza Dickins and debutantes Michael Joynson and Mason Cartwright. Surprisingly, Ellesmere Port’s Matty Fagan suffered his first career defeat with a points loss to Latvian Andrejs Podusous.