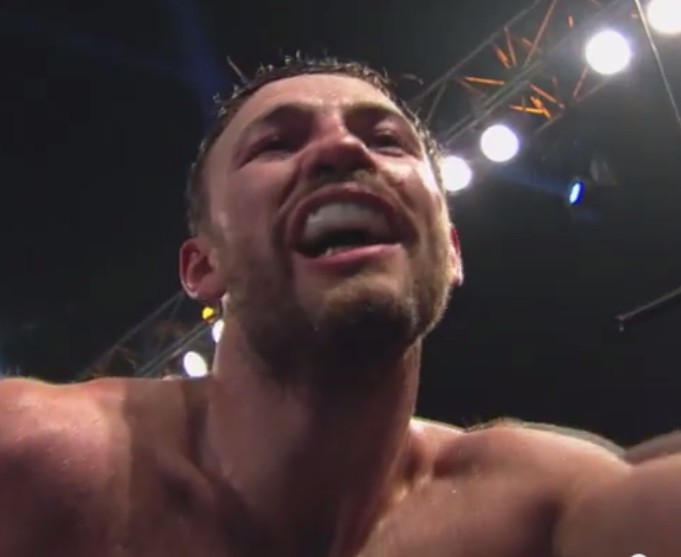 There was plenty going on in the world of boxing last night; what with British star Amir Khan turning in a near perfect display against Devon Alexander, in doing so winning his must-win fight in brilliant style. We also saw Tim Bradley go to war with Diego Chaves over 12 eventful rounds, after which apparent winner Bradley had a badly swollen left side of his face and a controversial draw to show for it.

We also heard, over and over again, Floyd Mayweather Junior calling out Manny Pacquiao – even if the bold and committed words Mayweather bellowed into the Showtime microphone have come at least five years later than they should have done (and there are still many doubters who are yet to be convinced the fight will go ahead, yawn!). And we saw hotshot welterweight and Mayweather wannabe opponent Keith Thurman put on a perfectly commanding yet roundly booed showing against another tough nut in Leonard Bundu. Indeed, it was one interesting, not to mention long, night in Vegas.

But the man who in many ways stole the show in giving us this year’s ultimate “feel good” moment, was Ireland’s Andy Lee. The new WBO middleweight king courtesy of his come-from-behind TKO over former amateur standout and previously unbeaten pro, Russia’s Matt Korobov, Lee landed a devastating right hook and a relentless follow-up barrage to get the stoppage win in the 6th-round of a fight he was losing on points. A genuine good guy of the sport, the southpaw who was once coached by the legendary Emanuel Steward dedicated his win to both Steward and his new trainer Adam Booth.

Lee also set himself up for some well deserved big fights and big paydays in the coming months. Beaten only by Bryan Vera (the upset loss avenged) and by Julio Cesar Chavez Junior (who entered the ring that night in June of 2012 weighing something close to the cruiserweight limit!), Lee is at last a world ruler and he can go on to further prove the predictions Steward made about the man from Limerick many years ago.

I recall bumping into Emanuel years ago, in Vegas, just after the dull yet wide win Floyd Mayweather had turned in against Carlos Baldomir. This was back in 2006, and Emanuel was already singing the then 5-0, as a pro, Lee’s praises:

“Let me tell you about a guy whose name you should remember – Andy Lee. Remember Andy Lee,” Emanuel said, full of enthusiasm for the southpaw who had yet to make waves as a pro but had achieved plenty as an amateur star.

“You’ll be hearing all about this guy, believe me! He’s a great prospect and we’re working with him now. He’s going to be a big name.”

Lee is and has been a huge name in Ireland for some years. Now, courtesy of that great win last night – not to mention that stunning KO of The Year candidate he scored against John Jackson (son of the murderous punching Julian Jackson of course) back in May – Lee is fulfilling Steward’s prophecy.

Could Andy even be in with a shout of picking up a trophy when it comes to the handing out of this year’s Fighter of the Year awards?