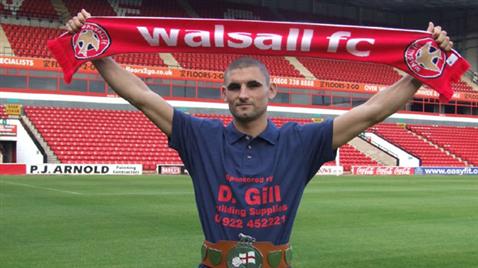 Martin Gethin believes he is more than capable of causing an upset in Hull when he clashes with hometown hero, Tommy Coyle at the Ice Arena in Hull, live on Sky Sports

The Walsall boxer travels to the Hull Ice Arena to take on Coyle at the top of the bill, and while the former British Lightweight Champion has been impressed by Coyle’s recent form but insists he is a long way from being the finished article.

“Tommy’s come on in recent years but he’s got a reputation that, for me, exceeds his ability,” said Gethin. “He beat Michael Katsidis last time out but let’s be honest; Katsidis was finished a long time ago.

“Tommy fought Daniel Brizuela and got knocked down four times. He did well to come back and win that one but it seems like he’s easy enough to tag. Derry Mathews got him out of there with one punch, so he does have chinks in his armour that I’ll be looking to exploit.

“I’ll pressure him but I will do it in the right way. He’s a good boxer and I respect him but I think I have what it takes to beat him.

“He’s a little overhyped in my opinion and I want to prove that he’s not the real deal. It’s a good fight for both of us. Whoever wins; it’s a decent name to have on your slate.”

As big a fight as it is for Coyle, on his home turf at the top of the bill, it’s a big night for Gethin. The 31 year old stopped a run of three consecutive defeats – against Ammeth Diaz in an IBF World Title Eliminator and Derry Mathews and Terry Flanagan both for the Lord Lonsdale lightweight strap – with a technical decision victory over journeyman Kevin McAuley in December.

After failing against domestic rivals Mathews and Flanagan, defeat to Coyle would be another blow to Gethin’s hopes of mixing with the country’s best. However, Gethin is convinced he will spoil the Hull man’s party and return to the Midlands with victory.

“A win is always important but this is a big one for me,” Gethin added. “I need to show people that I’m still a force at this level. What better way to do that than live on Sky? I’d like to thank Eddie Hearn and his team, and my manager, Errol Johnson, for getting me this shot. It’s a great chance for me.

“It’s never the end but a loss would take some getting back from. I look at Derry (Mathews) and how he’s turned things around but the climb is greater after a defeat.

“Tommy is in front of me and I’m confident of causing what many would see as an upset. I don’t see it that way. I’ve got a good record and have been in with some good fighters. I like him as a guy but I’m coming to his neck of the woods and I plan on leaving with the win.”

Gethin’s clash with Coyle is part of a big night of action in Hull as exciting Birmingham man Sam Eggington challenges Shayne Singleton for the WBC International Silver Welterweight title.