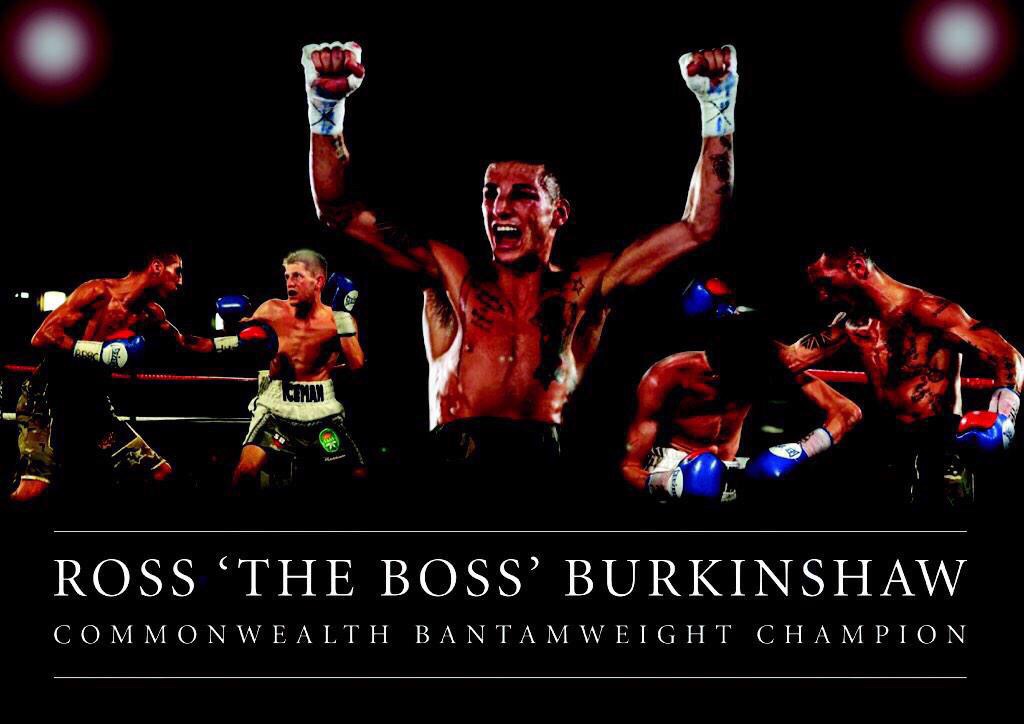 When British boxing fans think of the Steel City of Sheffield, a whole host of names from the annals of modern boxing history get conjured up. Perhaps the most famous among them is “Prince” Naseem Hamed, whose legendary exploits are world famous. Yet for us Brits, Sheffield is the home of guys like Johnny Nelson, Paul “Silky” Jones, Clinton Woods, Ryan Rhodes and nowadays “Kid Galahad” and IBF welterweight champion Kell Brook. And that’s just the fighters!

One of the boxers destined for greater things and following in such footsteps as both today and yesterdays Sheffield legends, is Commonwealth and WBO European bantamweight champion Ross Burkinshaw.

“The Boss” took time out of preparations for his May 30th fight against newly announced opponent, South African Klaas Mboyane, to speak to me regarding his love of boxing, his career resurgence under promoter Dennis Hobson and trainer Ryan Rhodes, and also, just where he sees himself in the near future.

Hi Ross. How are you pal? Everything good?

I am absolutely great after last night’s news thank you! Fighting for WBO intercontinental title on May 30th! I’m on top of the world!

You’re from the Steel City Ross. Can you tell us a little about your entry into boxing as a child, and what impact the “Sheffield Scene” had on you at that time?

I started boxing as a kid at eight years old, but before that I began with Jiu-Jitsu. Then after those sessions I used to spar. I was pretty good at it, so my Dad asked me if I wanted to try boxing. As a bit of an aggressive kid, I did. It calmed me down. I went to Ray Gillett at Hillsborough Boys Club where (former 175lb world champion) Clinton Woods first started…..

Clinton actually has a question for you Ross! He asked who the best looking boxer in Sheffield is!

(laughs) Tell him it is definitely me! It is DEFINITELY me!!

Hillsborough Boys Club. You were saying! Tell us more.

Yeah, Clinton was there and also Silky Jones started there. Both guys who went on to world titles in fantastic careers that inspired me a great deal as a kid. I must have met Silky at about 9 years old. Then I moved over to The Sheffield Boxing Centre and Glyn Rhodes and that is where I first met Clinton Woods and various other boxers such as Herol Graham. From 14 years of age, Nabeel Hamed (brother of Naseem) started sponsoring me. I was in the dressing room for Naz’s fight with Vuyani Bungu back in 2000 and Puff Daddy walked in when Naz was warming up! Those are some memories!

Talk to me about your promoter Dennis Hobson, a man who has a long association with British boxing.

Where do I start? I first met Dennis as a kid when I was carrying out Clinton Woods’ British and European titles. Then later on I was at the stage when I’d left Ricky Hatton (as promoter), and sometimes politics in boxing keeps people apart. I’d always wanted to sign with Dennis but the pressure was as such I wasn’t “allowed” to go near him, because of my manager at the time. When I became a free agent I had a good sit-down with Dennis and I knew instantly. I went with my gut instinct and my instinct paid off. This is his passion, boxing. And Dennis is also a friend of mine. My wife and I know him and his partner very well, outside of boxing too. There’s two tiers of relationship there and my trust is sky high. Dennis, Chris Smedley and Ryan Rhodes are three men I trust implicitly. They make my decisions and allow me to concentrate on what’s important. What happens in the ring.

May 30th is going to be some fight in Rotherham. You’re up against South African Klaas Mboyane. What, if anything, do you know about this lad?

Olly, I know nothing. Honestly. I don’t worry about all that. Ryan will have a look at him and he will be the man who deals with that. He’s told me a little bit about him, but he will be the one to watch him. I don’t bother going home and watching them on YouTube or anything like that. I know this is boxing mind you. One punch can change it all, but I promise you I will go into this likes it’s my world title fight. I’ll give it absolutely everything!

As we said, Ryan Rhodes trains you now. You’re building momentum all the time too, so how much of that is down to your hook-up?

Ryan has been great for me. I owe him a lot of credit. To be around that sort of knowledge and experience, and from one of my heroes growing up is only good for you as a fighter. As I said, Ryan is part of a team. Him, Chris and Dennis. They are all there for me.

I’ve got to mention the fight with Jason Cunningham that landed you the commonwealth title. That was a hard, hard fight.

Yes, it was. I took that on four days notice yet I knew I was going to win that fight. Nobody believed in me except my wife, Chris, Ryan and of course Dennis. Only those close people around me believed I had what it took to go out and win. I said I’d be able to go into the trenches and I did. I’m not sure many people believed I was capable of doing that, but there you go. The wheels are in motion now. A rolling stone gathers no moss. I plan to keep on rolling!

Domestically? Do you fancy chasing the British title, especially now you own the commonwealth? Dennis has asserted you want to go the WBO route to a world title but how do you feel about who’s around you here?

After he pulled out Martin Ward has moved up a weight now so the chances of us meeting are slim. Some people have been calling me out, (Ryan Burnett), but he’s a young lad and I understand why he’s doing that. Leave them to it. He needs to earn his stripes like I have, I’m winning titles and I’ve been in a lot of title fights. Its been a long time since the loss to Lee Haskins, I was just young then, he beat me but I’d fight anyone, that’s what we do. I’ve got this guy on May 30th though and that’s all I’m worrying about right now.

Finally Ross,. Where do you see yourself in 18 months/2years from now?

I would be hoping to be making the first or even second defence of my world title. Definitely. With the support of my wife and family and my team I’ll get there. And I will make any fight with anyone along the way!