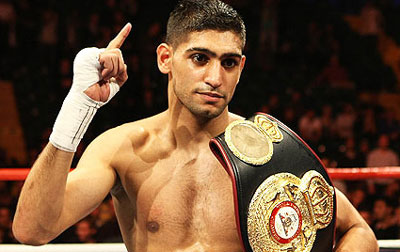 Amir Khan announces his next opponent for May 30th (video)

After being out of the ring for 6-months, Bolton’s Amir Khan, when speaking on a video uploaded to his wife’s YouTube channel, revealed that his next opponent will be former WBO light-welterweight champion Chris Algieri, with the fight taking place on May 30 in New York, with the Barclays Centre the possible venue.

Fans will be split on who will reign victorious, but Khan will be a heavy favourite going in. If you are going to place a bet on the match and want to learn more about gambling in the UK, check out what GamblingSitesOnline.org has to say.

Algieri’s only defeat in 21 contests, came against Manny Pacquiao in Macau last November, and although heavier than Khan’s natural weight, he shouldn’t pose too much of a threat to the Britain, who has some massive fights in the pipeline, non more so than a domestic showdown with IBF world welterweight champion Kell Brook.

The choice of opponent hasn’t gone down too well with many fans, with most hoping Khan would sign to face Brook after the pair have recently taken part in a war of words, even challenging each other to a winner takes all contest, with Wembley Stadium a likely venue, although it looks now that fight wont happen in 2015.

“You can class him as an ‘A class’ opponent – he’s fought and beaten decent opponents and just fell short against Manny Pacquiao, who is a star.” Khan said in defence of his decision to face Algieri.

“We’re looking at fighting in New York – it’s a great venue for me – and it’ll be good for the UK fans in a way. It’ll give them a chance to travel and it’s not as far as Las Vegas.

“I’m really looking foward to it and hope the fans get behind this fight. Hopefuly this can lead me on to the bigger fights in the future.”

Brook not happy with Khan’s choice!

Brook retained his title with a four-round win over Jo Jo Dan in his home town of Sheffield last week, and after the win called out Khan.

The two have traded verbal blows now for a long time and recently Brooks people offered Khan a June 13 date at Wembley for the all British super fight but Khan made it clear he was going his own way when announcing to face Dan instead, saying he prefers to build a fight with Brook up more, with it being such a big match-up.

Can everyone please wake up. I said the fight between me and kel brook will happen. When I think it’s right. Look at who kel fought last