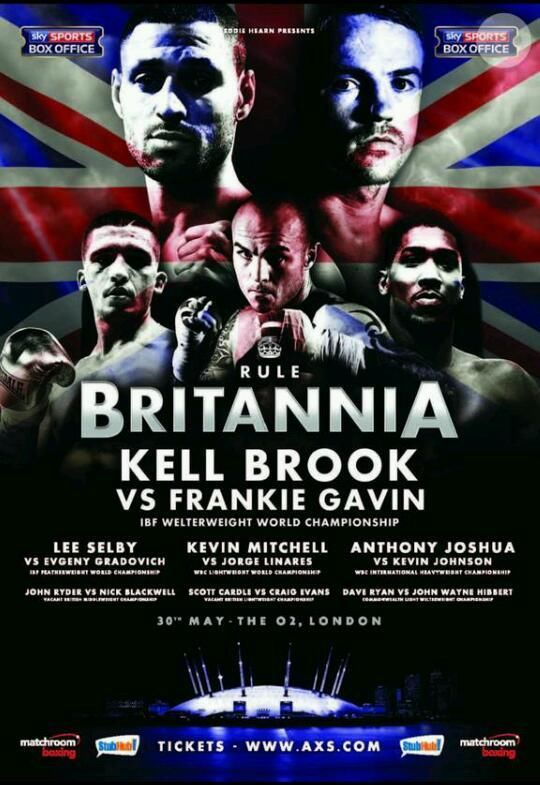 London’s O2 Arena will host a huge evening of British boxing on Saturday May 30th, with a card that will see a total of seven bouts take place where there are various world titles on the line. Kell Brook will certainly be one of the main attractions of the evening, as he defends his IBF welterweight belt against fellow Brit Frankie Gavin. Other fighters taking part on the night will include Kevin Mitchell, Anthony Joshua and Lee Selby to name but a few. Let’s have a look at some of these bouts in more detail.

Having suffered a terrible attack whilst on a family holiday, Kell Brook showed there was no ill effects from his stabbing incident when seeing off Jo Jo Dan at the Motorpoint Arena in Sheffield back in March. While is will be a realitvey quick reappearance for the 29 year old, the fight with Dan only went four rounds, and Kell Brook no doubt wants to get back in the ring after being on the sidelines for some time. As far as the odds compilers at Betfair are concerned, Brook should have no problems getting past Gavin, and the defending champion has been priced up at 1/8 to be victorious. Frankie Gavin is available at odds of 5/1, while the draw is currently on offer at the 25/1 mark. Gavin was English boxing’s first ever World Amateur champion, and has suffered just one defeat to date against Leonard Bundu last October. While this is considered to be a stepping stone for Brook, he cannot afford to underestimate a potentially dangerous opponent in Gavin, who will be giving his all to become world champion.

Kevin Mitchell was last seen when getting the better of Daniel Estrada at this venue at the end of January, and that victory earned the right for him to take on Jorge Linares for the WBC Lightweight title. Throughout his career, Mitchell has shown a huge amount of promise, but a couple of shock defeats have derailed his opportunities to be a real force at world title level. Following six wins in succession, Kevin Mitchell definitely deserves another shot at a world title, and the bookies are struggling to split the two men in this bout. Both Jorge Linares and Kevin Mitchell have been priced up at odds of 10/11 to win the WBC strap with Betfair, with the draw available at 22/1. Dagenham based Mitchell will no doubt receive the bulk of the crowd support as was the case in his last fight, and it would be a fitting venue for him to deliver a big performance.

Lee Selby will be taking on one of the best boxers in the division in IBF World Featherweight king Evgeny Gradovich in what will be the Russian’s fifth defence of his title. Gradovich is the IBF featherweight champion and unbeaten in his career but goes in as the underdog against Selby at 2/1. Selby is 2/5 coming into his first world title fight with a record of 20-1, while the champion’s record reads 19-0-1.

This is 28-year-old Selby’s big chance and the man they are calling ‘The Welsh Mayweather’ is determined to do justice to the compliment and promises to lift the world title by KO. “I’m preparing the best I can, I’ve got the best-quality sparring and I’m going into the fight at 100 per cent, I predict I will win the world title by KO.” said Selby.

Olympic gold medalist Anthony Joshua is the golden boy of Matchroom Sports, and is fast becoming one of the biggest names in the heavyweight division. This is based more on potential than what he has achieved thus far, but Joshua has beaten what has been put in front of him to date with relative ease. Kevin Johnson is basically a journeyman, and it is very hard to see him inflicting the first defeat of Anthony Joshua’s professional career. Joshua is a as short as 1/50 at betfair.com to win this bout, Kevin Johnson can be supported at 14/1, while the draw is a 22/1 chance. The Hearn camp are definitely picking their fighter’s matches carefully, and there may well be one or two more of these easy options before he makes the step up to fight the likes of Tyson Fury and a possible bid for a world title in the heavyweight division.