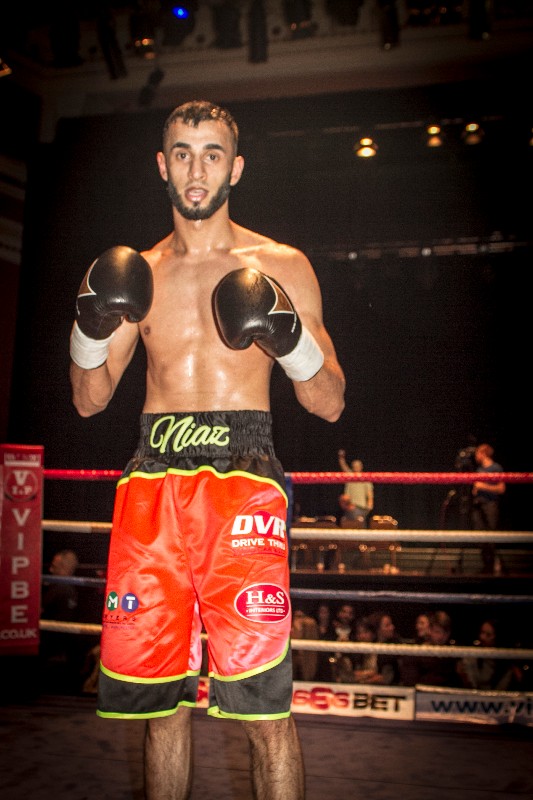 Unbeaten welterweight prospect Qasim Niaz from Blackburn will take part in his 8th pro fight on Saturday night when he takes on wiley veteren Kristian Laight at the Middleton Arena in Manchester on the latest Black Flash Promotions card.

Niaz, 23, who is trained by Kevin Maree, hasnt fought since November after suffering hand injuries and his absence from the ring has been noted amongst his ever growing fan base and the believers who have tipped him to go far.

It is a well over due return for the boxer nicknamed ‘Cast Iron’ who stands at 6ft, very tall for a welterweight. What is impressive is he uses his attributes to his advantage and has dominated so far in all his fights. Niaz turned pro in 2013 and has stood out with his elusive skills and the variety of punches he throws from acute angles. All his work comes from behind a fast cultured jab and he is a nice boxer to watch for the purest.

Niaz is certainly one to keep an eye on, Blackburn could have a star in the making!

If you would like to go along to see Niaz in the flesh on Saturday night, Tickets are available at £25, £35 and £60 Ringside and are available from @BlackFlashPromo or from @1Niaz1

If you cannot get along to the Middleton Arena, you can still get to see Niaz in action on BBTV LIVE on this website from 7pm: visit our TV Page Here to subcribe:

WATCH ON: BBTV LIVE on this website WWW.BRITISHBOXERS.CO.UK  from 7pm: visit our TV Page Here: