Bury banger Quigg, 26 remains hopeful of a fight with IBF champion Carl Frampton, though this looks ever more unlikely with the Northern Irishman expected to move up to Featherweight after a shaky defence of his title over Mexican Alejandro Gonzalez in his last fight.

The Donaire encounter presents a more than credible alternative for Quigg. Donaire is a dangerous puncher and ex Super Bantamweight champion, who performed admirably in defeat against arguably the best at the weight, Guillermo Rigondeaux, flooring him in the tenth round of their 2013 face off.

Hearn has advised that talks between himself and Donaire’s legendary Top Rank promoter, Bob Arum 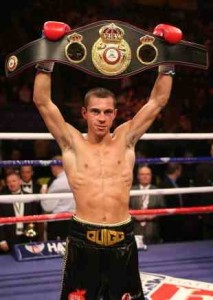 are expected to begin next week.

Speaking with Sky sports, Hearn stated; “I have been speaking to Bob Arum for a while about the Donaire fight…originally we were looking at Dubai but we would like to bring the fight to Manchester at the end of November.”

“I think Quigg-Donaire is a wonderful fight and one we are very keen to make” added Hearn.