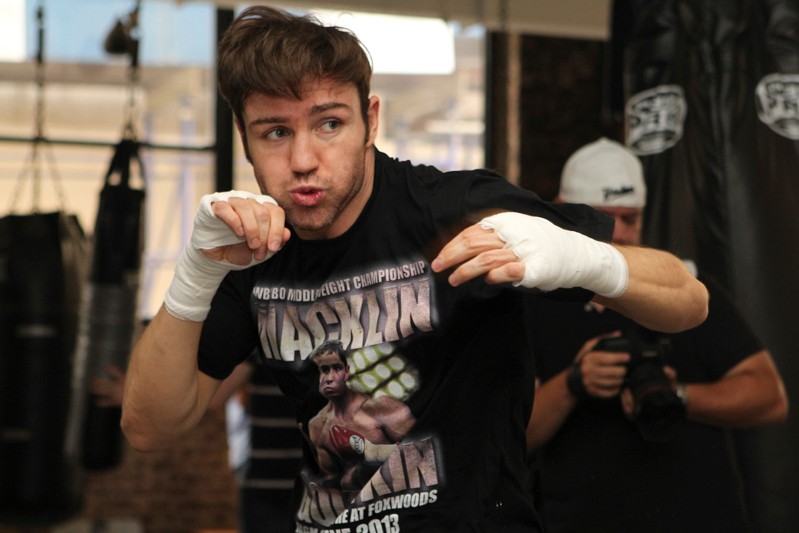 Macklin moves down a weight for Welborn title fight

Matthew Macklin believes that moving down to Super Welterweight can turn his World title dreams into reality as he faces Jason Welborn for the vacant WBC International title at the Barclaycard Arena in Birmingham on Saturday (October 17) live on Sky Sports.

Macklin has had three World title fights at Middleweight, with a cruel split decision loss at the hands of Felix Sturm in June 2011 the closest he has come to the ultimate prize.

The 32 year old first thought of the move down to Super Welterweight following his loss to Jorge Sebastian Heiland in Dublin in November and he has told fight fans that they can expect to see hard-hitting ‘Mack the Knife’ back to his best as he brings back memories of one of the most thrilling fights in British boxing in the last decade.

Macklin was last down at the weight for his epic battle with Jamie Moore back in September 2006 and returns to 154lbs for the first time since that clash to meet Tividale’s Welborn in a local derby that will show if Macklin can back up his belief that World titles are still in his reach.

“I still think I can win a World title,” said Macklin. “After the fight with Heiland I did think maybe I am not what I was. He is a good fighter with a horrible style to fight, but after three rounds of feeling sharp, I just felt that I had no energy in there. I hadn’t been out of the gym all year and at 33, training like that, something has got to give. So I think that I still have plenty to give but it’s just been about changing the way i train a little bit, small adjustments, and I think that I am going to be more imposing at Super Welterweight and my power will be great.

“I’d been thinking about moving down for a while. The last time I fought at Super Welterweight was before I boxed Jamie Moore, but I was bigger then and lifting weights four times a week, and I struggled to get into Super Welterweight. I went off like a bull from the gates too which didn’t help because the pace was horrendous.

“Since then I haven’t lifted weights, I’ve probably been over-obsessed with getting down to the weight early, so a lot of my training is down to high intensity cardio work to sharpen my stamina, so I am smaller now and I think that I will make Super Welterweight comfortably.”

Macklin knows though that Welborn is a dangerous customer to face on Saturday night. The 29 year old has come out on the wrong side of title clashes with Frankie Gavin and Liam Smith but his win over Ryan Aston in June to land the Midlands Area belt has given Welborn momentum coming into a fight that he is under no pressure in.

“Jason and I have had very different careers, but to keep mine alive I have to beat him – simple as that,” said Macklin. “I want to reinvent myself at Super Welterweight but they might see it differently and think I will be dead at the weight and draw confidence from that. It’s a good fight for the pair of us and it’s great for the fans to have to Birmingham lads boxing each other on the bill.

“I have to win and win it well. He’s probably going to box ten per cent better than he has before and train harder than ever too, and he might think that I will struggle to get up for this fight, but I am excited about the future at Super Welterweight – but there is no future without beating Jason, so I am well up for this.”

Macklin’s clash with Welborn is part of a huge night of action in Birmingham as Sam Eggington defends his British and Commonwealth Welterweight titles against old foe Dale Evans, one of two men to beat Eggington in Prizefighter.