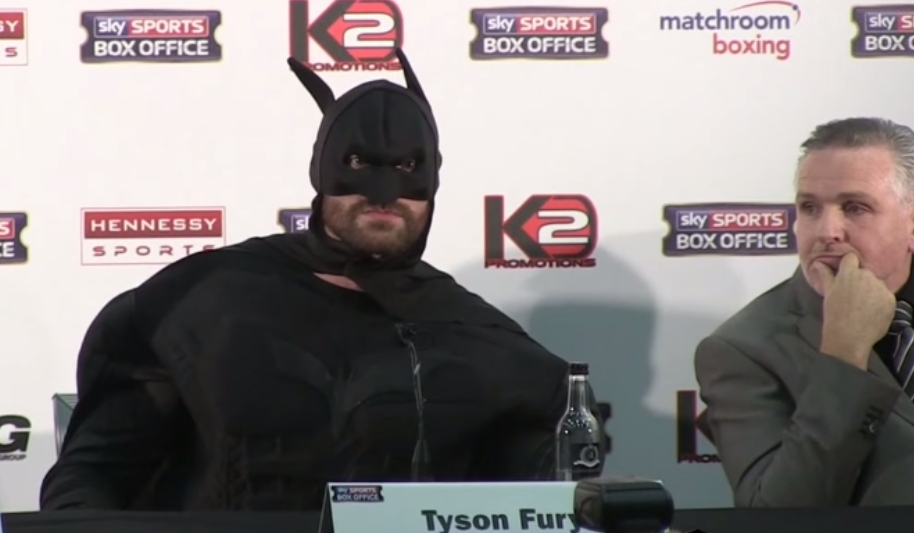 Why Fury beating Klitschko is good for boxing

On November-28th, Wladimir Klitschko will defend his array of heavyweight-championships against undefeated Mancunian Tyson Fury. This is an incredibly exciting match-up for boxing fans because many believe it will be an explosive encounter, a knockout either way is extremely likely if not almost guaranteed. In addition to a highly-competitive fight, unlike many of Wladimir’s previous contests where he has consistently dispatched of challenges with relative ease.

The overwhelming majority of Klistchko victories have come against opponents who are considerably smaller than him; therefore he has been able to overpower them (physically and technically) on the way to clinical knockout triumphs or resounding unanimous-decision victories. Although Poland’s Mariusz Wach stood over two-metres’ tall with an impregnable ‘granite’ chin, and showed encouraging, intermittent displays of aggression and toughness in their much-anticipated 2012 clash – he was unable, ultimately, to utilise his superior physical dimensions and essentially remained a walking punching-bag for Klistchko throughout the early proceedings of the fight.

Game-plans are one thing. It’s safe to say that Peter Fury – Tyson’s uncle and trainer – has devised an intelligent strategy for dethroning the heavyweight king. But it’s not all about preliminary tactics, however – it’s also about whether the fighter has the
skill, will and determination to effectively execute the game-plan. I believe Klitschko has a triumvirate of glaring weaknesses which Tyson can exploit. For this reason, I believe that the underdog can defy expectations on November-28, and I think anyone
who says otherwise is wrong.

Size will indubitably be an important factor in this fight, not least because Tyson is four-inches taller and enjoys a five-inch reach advantage. Tyson therefore has the rare capability – unlike many of Klitschko’s previous adversaries – to control the range by establishing the jab, and perhaps this will allow him to push Klitschko back as opposed to the other way round. We shall see. One thing for sure, though, is that it will be more difficult for Klistchko to employ his agricultural clinchwork in the manner that he so accustomed to. Lennox Lewis had a propensity to be more aggressive against taller opponents, as exemplified by his second-evisceration of Michael Grant and his thrilling exchanges with Vitali Klitschko. Nevertheless, I think it would be unwise for Klitschko – with his famously suspect chin – to adopt such an approach against a dangerous and proficient counter-puncher.

Moreover, one thing that has always impressed me about Tyson is his pugilistic talent. Despite occasional moments of undisciplined sloppiness – he possesses exceptional speed and agility, despite his gargantuan stature. His natural skills have been cultivated and honed in recent years by Peter Fury, as exemplified by his one-sided dismantling of Dereck Chisora last November in the rematch. Another testament to Fury’s raw ability is the fact he has resoundingly dominated legitimate contenders whilst barely stepping out of first-gear, often whilst overweight and ostensibly out-of-shape. Consequently, I believe that a disciplined, motivated and in-shape Tyson Fury definitely has the potential to upset the seasoned veteran.

Versatility is also the watchword. From his recent performances it is evident that Tyson is an unconventional yet well-rounded fighter. He is also an ambidextrous switch-hitter: equally competent fighting in a southpaw-stance as well as an orthodox-stance. Furthermore, one attribute that cannot be understated is his in-ring adaptability and all-encompassing skill set – it is somewhat rare to find Tyson forced into a position where he is uncomfortable or vulnerable. He can box on the back-foot, the front-foot, offensively or defensively. He can fight on the inside or on the outside. He can opt for excruciating body-punches or thunderous uppercuts. He can become embroiled in a wild brawl or he can counter-punch his way to a lopsided points victory. Or, if you’re not careful, he can close the show with a haymaker.

Tyson is fundamentally unpredictable and can win a fight in multiple ways, much to the consternation of his opponent. Conversely, Wladimir is a very methodical fighter and can be described as an archetypal “outside fighter”. It is unlikely, given his well-documented shortcomings in the toughness and stamina departments, that he would adopt any other method – even for a bout of this magnitude. It’s just that his style – nurtured by legendary trainer Emmanuel Steward – has been, for the most part of his career, impossible to overcome. The notion in the Klistchko camp seems to be that if it’s not broke, it needn’t be fixed.

Tyson, due to his background and personality, has absolutely no trepidation going into the biggest test of his career. He seems positively fearless, and fervently believes that he can prevail over Klistchko in an emphatic fashion. The only impediment to a Tyson Fury victory, in my opinion, is Tyson himself.

“Your two best wins are over David Haye and Alexander Povetkin. What am I to be afraid of? A man who has had twenty-five title-defences against bums?” He asked Klitschko, at the first press-conference.

Nonetheless, there is no doubt whatsoever that Wladimir is a consummate professional and one hell of a fighter, basically. He has ruled the division for approximately a decade which is a magnificent accomplishment, regardless of the quality of his opponents. However, at nearly 40 years’-old he isn’t getting any younger and with this comes the natural deteriorations in athleticism, reflexes, movement and punch-resistance.

I believe that it would be great for boxing if Tyson Fury capitalises on this and becomes the new heavyweight champion because not only is he a British fighter deserving of our support, but he is also a hugely entertaining character inside and outside of the ring. Whatever you think of him on a personal level, you cannot deny that Boxing need characters like Tyson Fury to reinvigorate the sport and bring it back into the mainstream where it belongs.

The alternative is just another routine Wladimir Klitschko victory; and although he is a great champion, I’m getting pretty tired of them. Aren’t you? That’s why I’m rooting for the underdog in this battle. Come on Tyson Fury!

Thats my view, whats yours? Please leave a comment below.