There has been talk of a third meeting between British boxing legends Nigel Benn and Chris Eubank since they last met each other and fought to a draw in 1993 more than 20-years ago, it never happened but the rubber match at the moment seems closer than ever before.

CLICK THE VIDEO PLAY BUTTON ABOVE TO SEE EUBANK CALLING OUT BENN ON IM A CELEBRITY.

Eubank retired in 1998 after an amassing 52 fights, winning 45 of them, whilst Benn hung up his gloves two years earlier in 1996 after 48 fights with 42 wins, and it seems almost impossible that a fight between the pair would even be contemplated with Eubank’s 49 years old and Benn 51, but to be fair they are both still in fantastic shape. 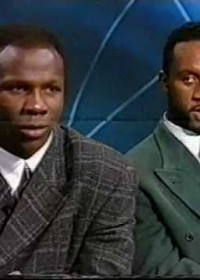 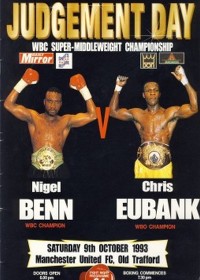 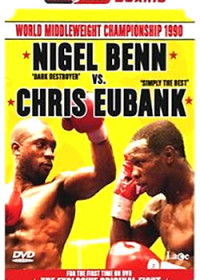 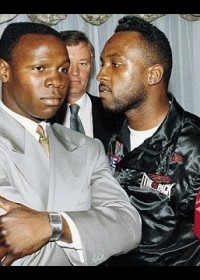 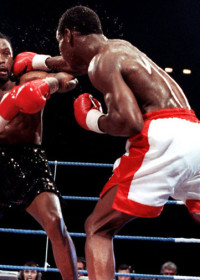 Not only would a fight scratch a few competitive itches for these former middleweight and super-middleweight world champions and reignite the fighter inside each of them which still burns deeply, it would still be a massive public draw

To comeback to simply fight again would mean nothing to either or anyone else, they would only ever contemplate facing the other.

The phrase Benn-Eubank has almost become a British phrase book quote and together they captured the general public’s imagination in the 90’s when professional boxing was prime time terestrial TV and millions of fans and casuals, Mums. Dads and Grandma’s and Grandad’s tuned in after tea.

Their first two fights in 1990 and 1993 were huge box office events and a third fight would pull in millions of viewers and millions of pounds. It’s thought ITV and Sky would both be in the bidding for the rematch which could generate in access of £10million + to share between both, a nice unexpected retirement package for these British boxing legends couldn’t be sniffed at.

These latest fight rumours were ignited when Eubank who has made a whole new name for himself on ITV’s Live I’m A Celebrity show baited his rival in the jungle.

Eubank, spoke to other contestants on the show in the jungle and said how “fierce competition”  between them still burns, but admitted he wasn’t competitive as a rule but Benn knew how to bring that out of him and is the only one who could.

In the TV show at the weekend, Eubank claimed he would like a third meeting with Benn and told his camp mates ‘The Dark Destroer’ was someone who got under his skin in a way no other opponent did.

Eubank, who was known as ‘Simply the Best’ in his ring days, but now likes to be known as just ‘English’ went on to ask the other contestants if he should fight Benn again and when they all welcomed a fight he said he would give his camp mates ringside seats for the fight.

“I am not really competitive. I can easily always walk away and then I come to Nigel Benn, the bad blood between us is fierce. So I am not competitive, only with him.” Eubank told his camp mates.

“I got it (won) the first time, I drew with him the second time. He was born to activate me, he won’t leave me alone.

“He keeps asking for this rematch. If I do fight him again, he is not beating me.

“Of course there is a part of Eubank that wants to get back in the ring with Nigel Benn.

“If you are listening, I am in the jungle and I am getting fit boy.” Eubank added as he lifted his top to show his six pack and what good shape he is in for a man his age.

And despite their age, TV channels would queue up to screen the Eubank v Benn rematch

Good luck @chriseubank hope you do well in the Jungle Mate, when you get out let’s get it on with the fight ??#boxing #BennVEubank