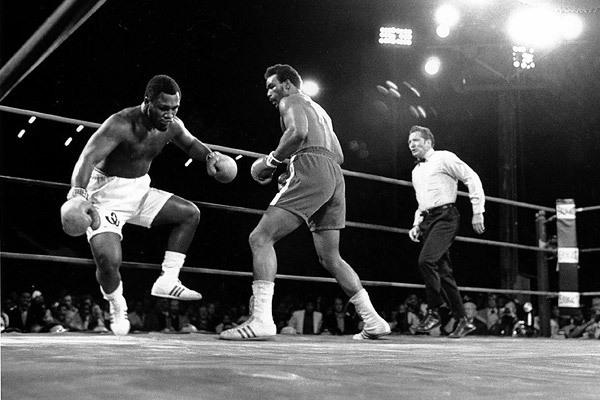 Las Vegas is a city world-renowned for glitz, glamour, lavish shows, 24 hour bars and of

course a plethora of luxury hotels and casinos. But over the past 50 years visitors haven’t

sport’s history. With such an incredible back catalogue of bouts to pick from we’ve selected

just some of the best and most memorable Sin City showdowns.

Foreman and Lyle was filled with notable highlights that made it a truly thrilling battle. The

after his famous loss to Muhammad Ali back in 1974. Lyle put in a gutsy performance

against the former champion and by the fourth round, after exchanging numerous punches,

Lyle had managed to knock Foreman to the floor. However, in a dramatic turn of events,

Foreman responded in emphatic fashion, rising quickly from the canvas and flooring Lyle.

the match. Click on the image above to watch the full Foreman v Lyle fight.

ways after serving his 3 year prison sentence. It took 11 rounds for Tyson to grind out

finished then all eyes were firmly on a rematch. One year later fans got their wish when the

would be in for. Following a supposedly unintentional head butt in the 2nd round from

Holyfield, which mirrored a similar event occurring in their previous meeting the year

before, Tyson decided to get even by sinking his teeth into his opponents ear and biting a

piece clean off. A foul that left the vicious Tyson disqualified from the match.

the mid 80’s you would have been in for a real boxing treat. Hagler vs. Hearns in 1985 was

action. There was nothing here about pre-determined game plans; it was a simple exhibition

of high-energy, pace and pure intensity that resulted in “the War” being won by Hagler after

the match was finally stopped.

Whilst the Mayweather vs Hatton fight may not have been the greatest fight of all time, in

letting him work on the inside, but the sheer magnitude of the event made it one of the

biggest in Vegas’ history. – Over 30,000 British fans arrived in Vegas to cheer on the Hitman with the roof almost coming off the MGM Grand when their hero arrived to the tune of Blue Moon. However, it was Mayweather who made all the noise in the ring, eventually sending Hatton into the ring post and then the canvas for his 39th successive victory.