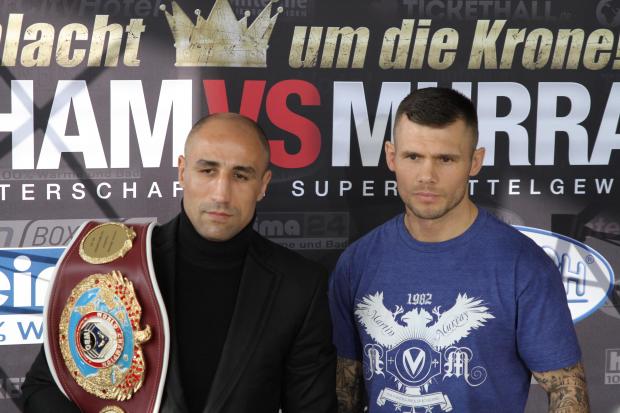 Martin Murray: “I won’t be leaving Germany without the title’’

British boxing star Martin Murray (32-2-1, 15 KOs) has vowed to not leave Germany on Saturday night without the WBO World Super Middleweight Championship when he takes on champion Arthur Abraham (43-4, 29 KOs) at the TUI Arena in Hannover.

Speaking at the final pre-fight press conference, Murray who is contesting his first title at super-middleweight following three valiant attempts at middleweight, is confident he can finally get his hands on the ultimate boxing prize and return to St Helens with Abraham’s belt.

‘’We’ve been studying Arthur carefully and I believe I’ve got him beat,’’ said the 33 year-old from St Helens. ‘’He is a great fighter, but he’s not changed his style in years, and in my opinion, he’s not evolved. It’s going to be a tough fight but I know it’s well within me to win. I won’t be leaving Germany without the title!’’

The champion though was in confident mood and although he admits that Murray is a threat and no easy task, he is however determined to hang onto his title and send Murray home unlucky again.

‘’This has been one of the toughest camps of my career,’’ said Abraham. ‘’My coach Ulli Wegner and his assistant Georg Bramowski have pushed me to my limits. It’s been brutal at times, but it will all be worthwhile when my hand is raised on Saturday night. Martin is a good boxer and I expect him to give me a hard fight, but there is no way he is taking my title!’’

Promoter Kalle Sauerland added. ‘’This is a real 50-50 fight,’ ‘’And I think it will be Arthur’s toughest test for many years. However, he has never shied away from a challenge, and against Murray, I expect Arthur to prove why he is the number one fighter in the super middleweight division.’’

Another man under no illusion of the danger Murray poses is Abraham’s long-time coach and mentor Ulli Wegner, who will be celebrating his 100th World title fight on Saturday night. ‘’For Arthur and I, a unification bout is the common goal,’’ said the 73 year-old. ‘’But first he must get past Murray, which will be no easy task!’’

The WBO World Super Middleweight Championship fight between Arthur Abraham and Martin Murray will be broadcast live on Saturday on Sky Sports.