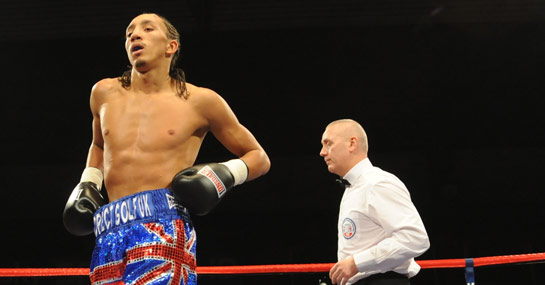 Nurse (32-2-1-KO6) had to climb off the floor in the 5th round in this rematch against an inspired Chris Jenkins but got up and managed to do enough to take the win over the 12-round championship distance and lift the vacant super-lightweight title with judges scores of 115-112, 115-112, 116-111.

The pair had fought to a draw previous in July and a rematch was demanded to settle the score. It was Nurses slick boxing skills that took the eye of the judges as oppose to Jenkins’ come forward aggressive approach and a happy new champion was delighted to finally get the Lonsdale belt around his waist while fully respectful to Jenkins

“Fair play to Chris, He caught me with a cracking shot – It was a good close fight and I don’t think it was as wide as that.” said Nurse afterwards.

“I thought I was unlucky first time but this was a great fight and I enjoyed it.”

Belfast’s Ryan Burnett claimed the British bantamweight title but was taken the distance by wiley old pro veteran Jason Booth despite putting dropping the Nottingham man in the first round.

Burnett landed a big right that forced ‘2Smooth’ to take a count, but Burnett couldn’t finish the job and the Nottingham man re grouped to give the Northern Ireland prospect a good 12 rounds learning fight and takes his record to 12-0-KO9.

Other results from Manchester

Isaac Lowe retained his English featherweight title, but could only manage a draw after 10 rounds against Manchester’s Ryan Doyle in a good scrap fought at a fast pace. Both gave it their all and a rematch would be a good call.

Surrey’s Charlie Edwards (6-0, 3KOs) made the first defence of the English flyweight title when he stopped Phil Smith in the 6th round after landing a big right uppercut.

Unbeaten rising Middleweight Marcus Morrison (8-0-KO5) was given a good test by the experience Simon Lucas over the six round distance and just edged a close affair 58-57.