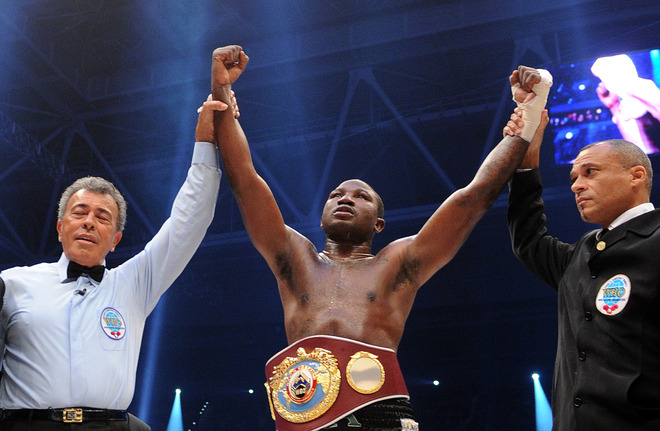 In another wild, brutal and wholly exciting cruiserweight fight in Kazak in Russia today, London-born Ola Afolabi upset the odds and at the same time revived his career with a stunning 5th-round KO over previously once-beaten Rakhim Chakhkiev. Landing a right hand to the head swiftly followed by a left hook that landed high on the head, Afolabi left Chakhkiev flat on his face, knocked cold. The official time was one-minute and 44-seconds of the 5th and Afolabi improves to 22-4-4(11) . Southpaw Chakhkiev, the younger man by three years at age 32, is now 24-2(18) .

On a night that saw some astonishing action, Afolabi’s war with Chakhkiev may well have been the fight of the night. Chakhkiev came out fast at the opening bell and, quite literally, fought like a wild man, every punch he threw at Afolabi – a significant number of them landing – launched with absolutely everything the bearded warrior had. Afolabi once again showed his fine chin yet the ferocity of the fight told you something had to give. It took a while, though.

Afolabi, as smart as he is tough, let Chakhkiev punch himself out, even though it looked at times as though the man known as “Kryptonite” might be overwhelmed. The first three rounds were action packed, even akin to something out of a “Rocky” movie, such was Chakhiev’s wild abandonment and his willingness to swing for the fences with almost every shot. In the 3rd, Afolabi was cut due to an accidental clash of heads, his left eye spurting blood.

By the next session, Chakhkiev was open-mouthed, his all-out attack having taken a lot out of him. Afolabi was feeling the hot pace too, but he is a crafty veteran and he soon launched a vicious attack of his own. Landing a right hand to the side of the head, Afolabi seemed to score a knockdown, with Chakhkiev tumbling to the mat. Quite amazingly, the referee called it a slip and the action resumed. Afolabi had his man now, despite the poor call from the official, and the ending was clinical. A right hand followed by a sharp left sent Chakhkiev crashing to the mat, totally gone. Facedown, Chakhiev should have been given medical assistance immediately, instead he was given a needless count.

Afolabi, who was coming off a points loss against Victor Emilio Ramirez, badly needed this win  and with it he picked up the IBO cruiserweight strap. Ola has never had things easy, yet he proved he is still a force to be reckoned with at this stage of his career. Chakhkiev, who had previously only been beaten by Krzysztof Wlodarczyk in a WBC title challenge in 2013, gave a spirited effort (an understatement) yet ran out of gas and was ultimately outsmarted by one of the division’s underrated practitioners.