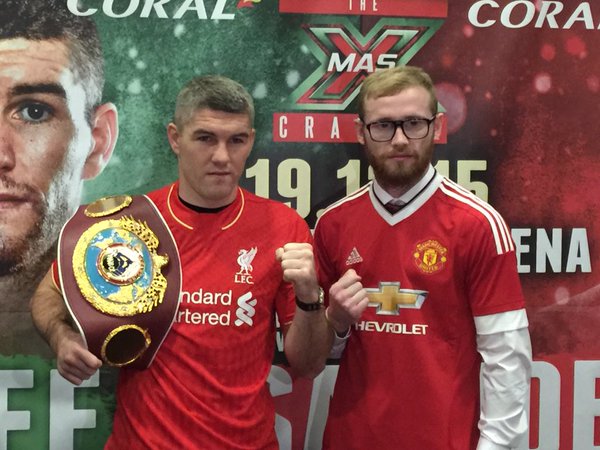 Smith says Kelly has brought his nasty side out

“He’s got a real cheek shouting out and using my name to get the fight against me, but he’s got it now and he’s going to wish he used his brain first instead of opening his mouth.”

WBO World Super-Welterweight Champion Liam Smith says his challenger Jimmy Kelly has been cheeky using his name to get the fight he wanted and now he’ll pay.

The normally happy Scouser was a totally different character as he met Kelly head-to-head today in Liverpool for the first time ahead of their fiery north-west derby showdown with Smith saying Kelly’s comments have really brought the nasty side out of him.

“He’s got a real cheek shouting out and using my name to get the fight against me, but he’s got it now and he’s going to wish he used his brain first instead of opening his mouth,” Fumed Smith.

“I’m still astounded by the pure cheek from Kelly who’s been given this World title shot as an early Christmas present, but he’s certainly going to get a surprise and he’s going to wish he never got what he asked for.”

“He’s used my name over and over in interviews and talked himself into a fight that even his team don’t really want him to take, but he’ll learn the hard way now. Everyone who knows me knows that I’m a quite a cheerful happy fella, but Kelly has brought the nasty side out that only a few of my opponents have seen.”

Smith smashed American John Thompson to win the crown last month and he’s confident of knocking out Kelly, who holds the WBO Intercontinental title and number eight world ranking, before the end of the twelve rounds.

‘Beefy’ says he’ll be fired up for the first Liverpool v Manchester world title showdown in the boxing ring in 82 years that Manchester won with the legendary Jackie Brown defeating Ginger Foran for the NBA World Flyweight Championship.

He said, “I’m massively confident going into this fight without overlooking Kelly at all,”

“It’s going to be a big fight between us, the cities, the history, the sporting rivalry it’s all in the mix, with plenty of pride and honour also at stake, I know I can’t lose this fight,”

“Anyone who goes to the football matches knows what it means to both cities, it’s a crucial showdown on the pitch and now that’s transferred to the ring on December 19th,”

“I’m surprised that’s it’s 82 years since the last time the two cities fought in the ring for a world title, Manchester came out top then, but I’ll reverse that this time when I KO Kelly,”

“Kelly’s got the world title fight he wanted and he’s got to back it up his claims now, but for me I’m going to put him right in his place.”