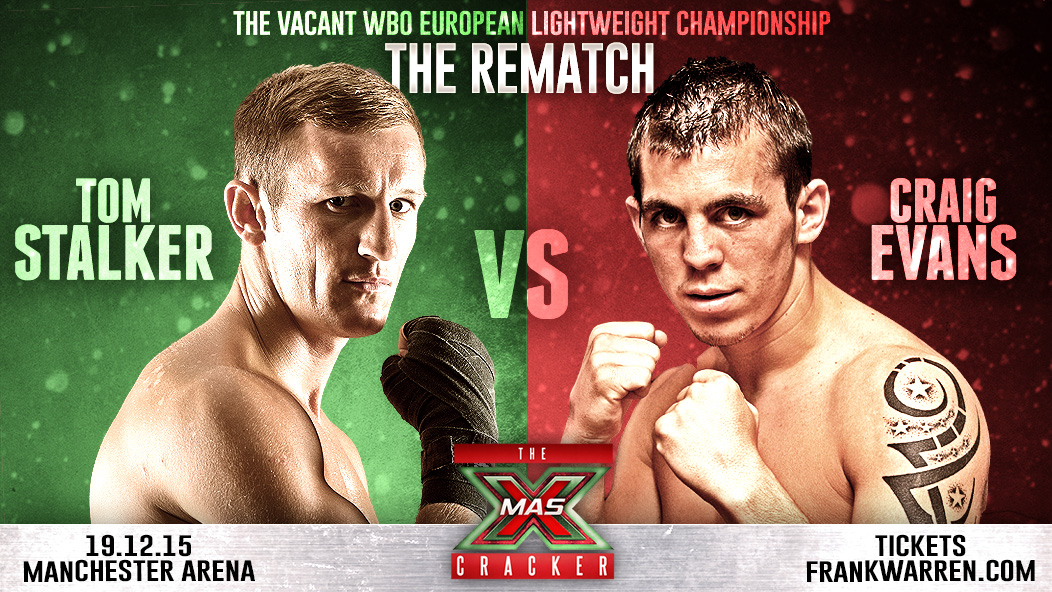 Stalker and Evans both confident ahead of rematch

The first fight was a brutal all-out war and declared a draw, now rivals Tom Stalker and Craig Evans are set to do battle once again to finally decide a winner on the huge Manchester Arena show on Saturday 19th December.

Stalker and Evans carry on where they left off last month at the same venue with the Vacant WBO European Lightweight Championship on the line again and both men are looking to emerge the victor.

After ten pulsating rounds of action with the momentum swinging between both men who were throwing and landing plenty of big shots – and a controversial knockdown of Stalker in the ninth round that was ruled a slip – the judges scored it 96-94 (Evans) 97-93 (Stalker) and 95-95.

Liverpool ace Stalker, who many felt had done enough to win the first encounter, says this time he will leave nothing to chance and will be the one holding the belt high.

“The first fight wasn’t bad was it!” Said southpaw Stalker.

“It’s a great Christmas present for the fans and for me to end the year as the WBO European Champion,”

“I’ve been in the gym since that fight and knew that it was going to happen again. I respect Evans, he’s a tough kid, but he can’t bring anything different this time around,”

“I know what I’ve got to do this time, I’ll be throwing more punches and as the fight goes on I’ll be getting stronger and stronger,”

“I’ve watched the fight over and over again and I’m convinced that I won, as did many that night, but if the judges saw it different what can you do? At least we’re doing it again and I know that this will be my moment.”

“If he’s expecting the same Tom Stalker he’s in for a big shock.”

“I’ve watched it back plenty of times and still believe that I won,” Said Evans.

“It was a great fight and the fans will get to see us go at it again, but this time it will have a different ending with me taking the title back to Wales,”

“I didn’t fight to the best of my ability last time and I know that this time I will be one hundred percent ready for him,”

“He’s shown me everything he’s got, what else can he bring to the ring? He’ll have to knock me out and he hasn’t got the power to do that,”

“For whatever reason the short right hand punch I dropped him with wasn’t scored so this time when I land I have to make sure he doesn’t get up again,”

“My preparations will be spot on and I ideally I don’t want to let it go the judges’ again so I can see me stopping him late.”