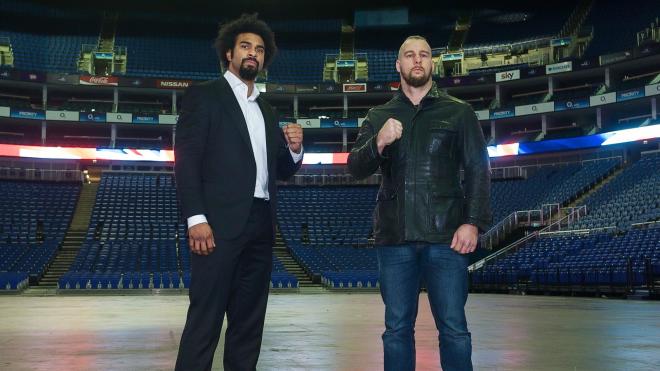 There was a time not so long ago when former heavyweight world champion David Haye was adamant he would walk away from the sport on his 31st birthday, October 13th 2011 to be precise.

The plan was, defeat Wladimir Klitschko in the July of 2011 and then take on his brother Wladimir before his birthday and then sail off into the sunset as the undisputed champion with millions in the bank. It didn’t however pan out that way, and on Saturday night he is back in the ring, over four years after his prediction.

Since losing on points to Wladimir Klitschko, Haye (26-2, 24KOs) has only had one fight since, a 5th round knockout victory over Dereck Chisora in July 2012. He had been schedule to take on Tyson Fury in 2013 but the Londoner pulled out and then withdrew again when the fight was reschedule a few months later, both times were sighted as injuries.

Roll on to January 2015 and this Saturday night Haye now 35 years old with have one last assault on the heavyweight scene he once planned to walk away from and hopes he can rekindle the form that saw him rise to the top before, although he admits he is entering the unknown after so long out of the ring, the longest in his 13 year pro career.

Haye believes it is his “destiny” to regain the world heavyweight championship and knows a knockout win at The O2 will put him back in the mix with fellow British contender Anthony Joshua and world champions Deontay Wilder and heavyweight champ Fury.

“It’s going to be exciting while it lasts but I’ve been out for that long you don’t know what’s going to happen,” Haye told Sky Sports.

“Remember Muhammad Ali came back after three-and-a-half years and he lost. Boxing history is littered with tales of comeback attempts. Look at Sugar Ray Leonard in his later years, Hector Camacho, Terry Norris, things didn’t go the way they wanted to go.

“Look at Roy Jones Jr; his fights didn’t go the way he wanted to as he got older. I am aware of the repercussions if I get it wrong, but I am willing to put it on the line. I am smart enough not to get in the ring if I’m not 100 per cent.”

Haye has recently teamed up with new trainer Shane McGuigan ahead of the return, after splitting with longtime trainer Adam Booth and has changed his pre-fight routine for the upcoming clash with De Mori.

He is not worried about the shoulder injury that forced him to call off a fight with Fury for the second time, and admits his training has not been the usual “manic rush”, despite a longer camp than usual.

A fit-again Haye believes he could even be a different fighter under the guidance of McGuigan, especially after such a prolonged break from the sport.

“I am looking forward to showing people what I can do. It’s not been easy,” he said.

“I’ve trained as hard but I’ve tried to train smarter than I used to. Maybe my timing, my rhythm and timing. This is stuff you can practise on all you like in sparring and training but when it comes to fight night, you just don’t know what it’s going to be like.

“That’s the unknown. It’s always the unknown just because you never know. When I train and fight regularly I know what I can do and even when I haven’t had one for a year I know, but after three years out, that’s a different story. I don’t know how happy I am going to be in the ring after so long out.”

“I’ve still got the same hunger I had the moment I beat Dereck Chisora three-and-a-half years ago and I truly believe it is my destiny to regain the heavyweight championship of the world. It’s just fragmented at the moment, scattered all round the world so it’s going to be a fun journey to pick those titles up as I go along.”

Haye’s fight can be seen Live and exclusive this Saturday night on free to air channel DAVE – Coming from The O2 on Saturday 16 January at 9pm.