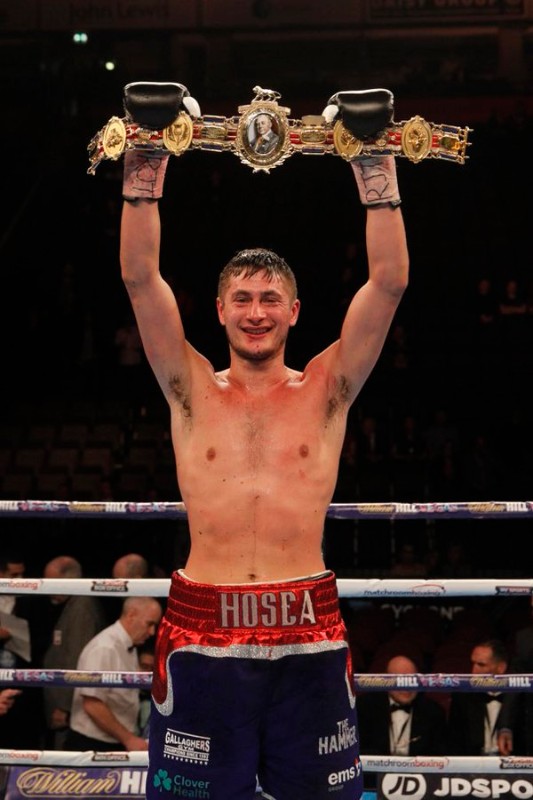 Manchester’s Hosea Burton claimed the British light-heavyweight title after stopping Miles Shinkwin in the 6th round in what was the fight of the night on the huge Frampton v Quigg promotion at the Manchester Arena on Saturday night.

Shinkwin started the fight well and was landing punches that worried the Burton (15-0, 6KOs) corner in the first round. Burton came out much better in the second and took over dropping Shinkwin (12-1, 6KOs) to his knees with a good left hook to the body after rocking his man with heads shots prior. The Hertfordshire man rose from the canvas and saw the round out and came out for the next ready to turn the tide again, and he did!

In the third and fourth sessions, Shinkwin began to take over as he belted Burton with some hard clubbing shots, one that smashed into the Mancunians nose sending blood streaming from it. The nose was no doubt broken and it effected him. Burton looked tired and unable to breath properly, the blood looked like it had drained from his face and he was in territory he had not yet experienced as a pro.

Credit to this tough lad Burton who comes from travelling stock and is related to former king of the Gypsies Uriah Burton, the former world bare knuckle champion. Also a cousin of Tyson Fury, they went to the same amateur gym, The Jimmy Egan Academy in Wythenshawe and Fury and family were cheering him on from ringside.

Burton dug deep and got himself together after two torrid rounds, where the fight looked like slipping away from him. Shinkwin is as hard as they come and wanted to win so bad. His efforts in the 5th were undone again when he walked into one of Burton’s hammer right hands and down he went. Again he rose and continued to come forward and trade with Burton, this was a very good fight.

Burton had pulled himself together now and was thinking more about what he was doing and picking the shots rather than falling into a dangerous range and in the sixth round he timed another perfect right that put an end to the fight and won him the Lonsdale belt.

A chopping right sent Shinkwin stumbling back into the ropes and as his legs stiffened and referee Victor Loughran jumped in to stop it. It was an impressive finish from Burton who landed the shot, knew he had hurt his opponent and he never rushed in to finish it, he just held his fight stance and watched Shinkwin falter.

“Im over the moon and very emotional at the minute.” Burton said after the fight.

“He tried to wear me down because he thinks he has more experience. He thought he was going to get me in the later rounds.

“That’s exactly what I wanted him to do. He played into my game-plan.

“I want to defend this belt and keep it on my mantle-piece forever.”

the support on here is amazing im trying to reply to all in boxes, theres millions thank you all so much for support pic.twitter.com/bH7iu1VBCd